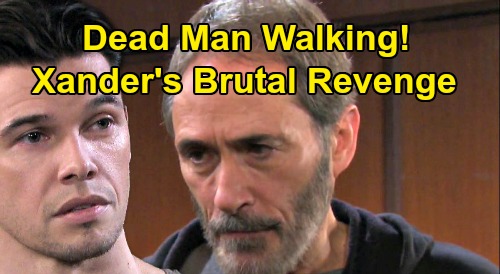 Days of Our Lives (DOOL) spoilers tease that various Salemites are going to have it out for Orpheus (George DelHoyo). As DOOL viewers know, Zoey Burge (Alyshia Ochse) has just told Rafe Hernandez (Galen Gering) a huge secret – that Orpheus was driving the car that forced Adrienne Kiriakis’ (Judi Evans) car off the road last Mother’s Day.

Of course, that means that Orpheus is the person who is responsible for the deaths of Adrienne and Sarah Horton’s (Linsey Godfrey) baby that night. That’s shocking enough, but then Rafe learned that Orpheus and Evan Frears aka Christian Maddox (Brock Kelly) conspired to make Maggie Kiriakis (Suzanne Rogers) and everyone else think that she caused the accident after drinking and driving.

That led to a chain of events that seriously altered several lives. After he found Maggie unconscious behind the wheel, Xander Kiriakis (Paul Telfer) assumed that Maggie caused the accident, and that ultimately led Victor Kiriakis (John Aniston) and Xander to switch babies in the hospital so that Maggie wouldn’t think she killed her own granddaughter.

As a result of Victor and Xander’s coverup, Will Horton (Chandler Massey) was thought to be guilty of causing the accident, and he went to prison for months. Then, Maggie’s “guilt” was discovered, and she’s now in prison where DOOL spoilers say that she’ll attempt suicide as she’ll be unable to live with what she believes she’s done.

Well, Orpheus’ guilt in causing the accident will come out as everyone learns that he’s now kidnapped John Black (Drake Hogestyn) and is holding him for ransom. Orpheus will also kidnap David Ridgeway (Kyler Ends), so things will be critical for a while.

DOOL spoilers indicate that eventually the hostage standoff will come to an end, so it seems that John and David will be relinquished in the end, but that’s not going to be the end of Orpheus’ problems.

Orpheus is going to have multiple people out for his blood. Days of Our Lives spoilers say that Justin Kiriakis (Wally Kurth) will give Orpheus a piece of his mind once Orpheus is captured when the hostage situation comes to an end.

Justin will be outraged that Adrienne had to die as a result of Orpheus’ scheme to kidnap Maggie, so he’ll probably have some choice words for the supervillain.

Sarah and Maggie should be similarly furious with Orpheus as well – they’ll have lost little Mackenzie “Mickey” Horton as a result of Orpheus’ carelessness in driving, and Maggie will have been driven to nearly commit suicide as a result of being framed for the accident.

Of course, while Justin, Sarah, and Maggie will no doubt be livid with Orpheus, they won’t really pose a threat to him in any way. But what about Victor and Xander?

They’ll be beyond angry with Orpheus when they realize that he caused the events that led them to take such drastic actions. And Victor will probably blame Orpheus for Maggie’s suicide attempt. Xander and Victor just might decide to take justice into their own hands.

It will be interesting to see what ends up happening to Orpheus, but we have a feeling that no matter what sort of justice the system has for him, he’ll probably be in far more danger from Victor and Xander.

Whatever ends up happening, there will be plenty of animosity toward Orpheus to go around once word gets out about what he did. Do you think Orpheus’ life will be in danger once Victor and Xander find out what he did?

Stay tuned to the NBC soap and be sure to keep CDL bookmarked for all your Days of Our Lives spoilers, daily recaps, and news. We’re your place for soap updates!