BY hellodrdavis on May 26, 2020 | Comments: Leave Comments
Related : Days of Our Lives, Soap Opera, Spoiler, Television 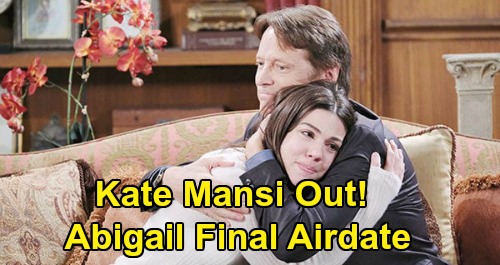 Well, the good news for Abigail is that the drug is now out of her system, but the bad news is that her hallucinations have continued to the point where she’s unable to function in society.

Abigail needs treatment, and there just happens to be a doctor who can help her, but his clinic is located in Florida and Abigail needs to get there ASAP if she wants to secure a bed in the clinic.

So, Abigail and Chad will head off canvas to Florida to get her settled into treatment. As DOOL viewers know, Abigail isn’t thrilled about having to leave the kids behind and trek to Florida, but since it’s really the only chance of her getting better, it’s what she’s got to do.

Chad insisted that he come with her to Florida for the time being, so he and Abigail will bid their family farewell.

Chad and Abigail will say their goodbyes on Wednesday, May 27th, and this will be the last we’ll see of Abigail for the foreseeable future, as Kate Mansi has left DOOL.

However, Days of Our Lives spoilers say that Chad will return later in the summer without Abigail, so it looks like Abigail will need to stay in treatment for a longer period of time than she and Chad initially anticipated.

As DOOL viewers know, Abigail recently asked Chad to return to Salem to be with their children in the event that her treatment ended up taking longer than they originally planned for. That will likely be a big part of the reason that Chad returns to Salem, although there will be another big reason for his return.

Chad will want to be present for Gabi’s trial, since Gabi is the person that everyone assumes drugged Abigail. DOOL viewers know that Gabi is actually innocent, as Wilhelm Rolf (William Utay) recently told Gabi that he set her up to make it look like she drugged Abigail.

That would imply that Rolf could be the one who drugged Abigail, with the intention of framing Gabi for it, or he could have just set her up after the fact.

Either way, Rolf is involved, but given Gabi’s history of drugging Abigail in the past, she’s being charged with Abigail’s current drugging, and DOOL spoilers say that Chad will return for her trial, in order to help put Gabi away.

So the good news is that Chad will be returning this summer, but Abigail will not be. Let’s hope that down the road Abigail recovers from the effects of the drug, and that viewers will see Abigail and her portrayer, Kate Mansi, back on our screens.

Stay tuned to the NBC soap and keep CDL bookmarked for all your latest DOOL spoilers, news, and daily recaps. You can count on us for your DOOL updates!