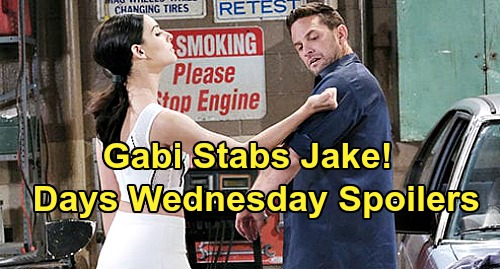 Days of Our Lives (DOOL) spoilers for Wednesday, May 27, tease that it’ll be time for some emotional goodbyes. DOOL fans know Abigail DiMera (Kate Mansi) is suffering from persistent hallucinations, but there’s a doctor in Florida who may be able to help her. After going back and forth for a couple episodes, Abigail finally caved in and agreed to let Chad DiMera (Billy Flynn) come with her.

However, Abigail made Chad promise he’d return home if this treatment took too long. Days of Our Lives spoilers say Chad will indeed come back this summer as Gabi DiMera’s (Camila Banus) trial draws near.

Chad won’t be off canvas all that long, so it’s kind of like when Eric Brady (Greg Vaughan) and Sarah Horton (Linsey Godfrey) took “Mickey” aka Rachel Black to Boston for cancer help.

For now, Abigail and Chad will have to explain things to their kids – at least as best as they can. Days of Our Lives spoilers say Thomas DiMera (Cary Christopher) and Charlotte DiMera will listen as their parents fill them in.

Chad and Abigail will probably play up all the fun Charlotte and Thomas are going to have with Grandma and Grandpa.

Abigail will struggle to part from her children, but she’ll try to put on a brave face anyway. Of course, Days of Our Lives spoilers say Abigail will also bid Jennifer Deveraux (Melissa Reeves) and Jack Deveraux (Matthew Ashford) farewell.

There’ll be a few shed tears, but the family will ultimately come together for a group hug that includes Chad.

Naturally, Abigail will recover and move past these hallucinations in time. Days viewers know Abby always reenters the picture sooner or later, so she should return down the road. Abigail just needs to focus on getting better for a while so she can live her best her best life and be the mom her kids need.

Afterward, Ciara will have something significant to ask Julie Williams (Susan Seaforth Hayes). Will Ciara want Julie to officiate the “Cin” wedding? Julie once refused to even let Ben make reservations at her restaurant, but Ben later saved Julie’s life after her cardiac episode.

In fact, Julie seems to be a little more relaxed about life in general since she received her heart transplant.

With all that in mind, Ciara may hope Julie’s willing to perform the ceremony. Since it would mean a lot to Ciara and Hope Brady (Kristian Alfonso) approves, Julie would probably get on board if Ciara begged. Back with Eli, he’ll stun Lani with a heartfelt marriage proposal.

Days spoilers say Lani will naturally accept, so it won’t be long until she’s checking her calendar to set a wedding date.

That’s when Lani will have a startling realization. Lani will realize she’s “late,” which will prompt an oblivious Eli to ask what she’s late for. It’ll eventually dawn on Eli what Lani means, so they’ll need to purchase a pregnancy test and figure out if Lani’s truly expecting a baby. Lani will get confirmation on that later this week, so stay tuned.

Until then, Jack will corner Gabi to blast her over Abigail’s ordeal. He’ll remain convinced Gabi’s responsible for drugging Abigail, but that’s doubtful at this point. Gabi would be the simple solution – and as we see from all the time jump shockers, Days never goes for the simple solution!

Across town, Jake will be seen sleeping, which is a tell-tale sign that DOOL fans will see his dream. Will it involve a steamy one of Gabi or something else? We should note that Gabi will stab Jake with a syringe on Wednesday – presumably one that’s loaded with the real serum. It’s possible that’ll be in Jake’s dream, but we’ll see how it all plays out.

As other Days news comes in, we’ll deliver more details. It looks like some shocking scenes are in store, so don’t miss all the action! CDL’s a great place to visit for exciting Days of Our Lives spoilers, updates and news, so be sure to stop by regularly.