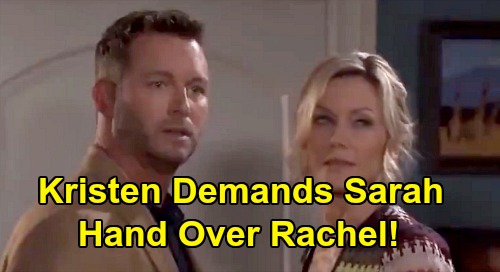 Days of Our Lives (DOOL) spoilers tease that more big hospital drama is ahead. As DOOL viewers know, back when Kristen DiMera (Stacy Haiduk) was told that her baby Rachel Black had died in the hospital nursery, she totally lost it. Kristen ended up having a breakdown and pushing Haley Chen (Thia Megia) down a staircase, which ultimately killed the young nurse. The news that Rachel had died was just too much for Kristen, whose emotions can run wild.

Well, according to DOOL spoilers, Kristen will once again be the center of some major hospital drama, and we suspect that it will have to do with the baby swap reveal that’s soon to come.

Well, soon Nicole will tell Eric the truth about the baby swap, and from there, Eric will tell Sarah, and all heck will break loose. But when will Kristen and Brady Black (Eric Martsolf) find out that their daughter survived?

Well, it appears that Kristen could be the last person to find out, and Days of Our Lives spoilers indicate that she’s going to have a pronounced reaction to the news.

Kristen is already inherently prone to having big emotional reactions to things in general, but just wait until she finds out that her baby Rachel is alive, and that Rachel has been a part of her life this whole time.

As DOOL viewers know, Kristen has felt a pull to the baby currently known as Mackenzie “Mickey” Horton for a while now, and when it all comes together and Kristen realizes why, she’s going to be totally overwhelmed.

Of course, Kristen should feel great joy to learn that her baby is alive, but joy isn’t all that she’s going to feel. Kristen will want some answers about who stole her baby from her, and chances are, she’s going to be overcome with rage. Kristen definitely has a dark side, and she’s going to want to get revenge on the people who perpetrated this horrible baby switch.

When Kristen finds out that Xander and Victor were involved, she’s going to want blood. DOOL spoilers say that Kristen will be feeling extremely overwhelmed, and when Kristen is overwhelmed, pretty much anything could happen!

It appears that a big scene is coming at the hospital, which could involve Kristen lashing out at Xander. We wouldn’t be surprised if Kristen threatens Xander with bodily harm over the whole thing!

Of course, there’s another possible reason for a big hospital scene, and that could be between the two sets of parents involved here. Kristen is probably going to want to take possession of her daughter immediately, and Sarah could take issue with that.

Sarah might not be willing to just hand over the little girl she’s believed is her own just like that, so we could see a big blowup between Sarah and Kristen, too.

Of course, Brady will be involved as well, and he tends to have a calming effect on Kristen, so that might help somewhat. But Days viewers just might see a major struggle between Sarah and Kristen as they try to resolve how to best manage the transition of the baby over to her actual parents.

Between Kristen’s overflowing feelings for Rachel, her rage toward Xander, and her desire to get Rachel in her arms again, we could see a serious Kristen explosion!

Do you think that Kristen will suffer an emotional breakdown over all this? Stay tuned to DOOL and don’t forget to check CDL often for the most up-to-date Days of Our Lives spoilers. We’ll keep you in the loop about the latest DOOL news as well!