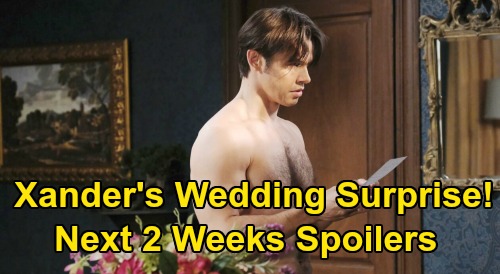 Days of Our Lives (DOOL) spoilers for the next two weeks tease that some bombs are about to drop. During the week of April 6-10, Nicole Walker (Arianne Zucker) will make a painful admission to Eric Brady (Greg Vaughan). Nicole will explain the real reason she went to New York and what she ultimately confirmed there. Dr. Amanda Raynor (Victoria Platt) admitted that a baby swap indeed went down.

Nicole will get choked up as she tells Eric that Mackenzie “Mickey” Horton isn’t his daughter. Eric will also get a bit weepy as he realizes Mickey actually belongs to Brady Black (Eric Martsolf) and Kristen DiMera (Stacy Haiduk).

The news of this baby switch will hit Eric hard, but he’ll feel like he has to do the right thing. Mickey should be with her biological parents – the parents she was stolen from.

Meanwhile, Sarah Horton (Linsey Godfrey) will pitch in on Stefano DiMera aka Steve Johnson’s (Stephen Nichols) surgery. After Stefano exhausts all options, he’ll accept that Steve’s chip will be removed.

That means Stefano will essentially die, but he’ll feel confident he’ll find a way to return someday. Stefano will bid farewell to his children before he goes under the knife.

Kayla Brady (Mary Beth Evans) will have a tough time with this extremely complicated surgery. She’s not really qualified to do it, but Dr. Wilhelm Rolf (William Utay) just won’t be willing to betray Stefano.

As a result, Kayla will try to take out the microchip herself. Sarah will be on hand to help in the operating room, which is good since a surgery snag will sound some alarm bells. After a life-or-death decision is made, Kayla will get Steve through the surgery and into recovery. All that’s left to do will be watch and wait.

Back with Sarah, she’ll leave the hospital and get ready to tie the knot. Sarah will be excited to marry Xander Kiriakis (Paul Telfer), but Eric and Nicole will want to stop her before she takes that step.

Days of Our Lives spoilers say Sarah will crumble over the baby swap shocker. It’ll break her heart to know she’s losing Mickey, especially since the babies were switched on purpose.

Eric will rant about Xander knowing the truth all along and will even threaten to kill him! DOOL’s weekly promo also shows Eric punching Xander in the face, so there’ll be some action-packed moments in the week ahead.

Back with Steve, he’ll awaken and struggle to remember crucial parts of his old life – specifically his deep love for Kayla. Days of Our Lives spoilers say Marlena Evans (Deidre Hall) will have some techniques that might help. Marlena will work with Steve and do her part to get him back to normal.

Over with Ben Weston (Robert Scott Wilson), he’ll go job hunting with Ciara Brady (Victoria Konefal). Days fans can also expect a run-in between Ben and Evan Frears aka Christian Maddox (Brock Kelly). Although Ben will spiral out of control briefly, Ciara will be there to remind him of what matters: their future together.

Speaking of the future, we should address what’s ahead for Xander. During the week of April 13-17, Days of Our Lives spoilers say Sarah and Xander will head to the altar. It’s possible DOOL made a mistake in releasing this info, but Xander and Sarah’s nuptials will seemingly still be on track. That’s strange considering the baby drama’s blowing up the week before.

Sarah might put on a show just so she can devastate Xander. It’ll hurt more if Xander thinks Sarah might forgive him and get married after all. If Sarah goes through with a charade like that, she could turn Xander’s worst nightmare into truly horrible reality.

Other Days of Our Lives spoilers say Eric will suffer with a broken heart. He’ll be struggling to deal with the loss of Mickey, but Nicole will be right by Eric’s side. There’ll be some sweet “Ericole” bonding moments as they try to get through this together.

Back at the hospital, Steve’s romantic memories will start coming back to him. He’ll remember Kayla and their beautiful love story, but Justin Kiriakis (Wally Kurth) will prevent Steve from jumping right back in. Kayla will be torn between her two love interests, but Jack Deveraux (Matthew Ashford) won’t want Justin to give up hope.

Jack will think Justin still has a shot, so he’ll urge Justin to fight for what he wants. Sadly, Justin will be wasting his time! Kayla can’t resist Steve, so it won’t be long until a “Stayla” reunion comes along. As other DOOL updates emerge, we’ll give you all the details. The action’s really heating up in Salem! CDL’s a great spot to hit for exciting Days of Our Lives spoilers, updates and news.