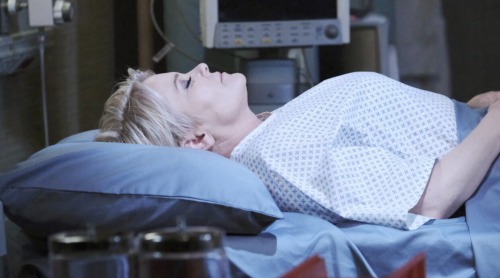 Days of Our Lives (DOOL) spoilers reveal that one NBC soap star is speaking out about her unexpected departure. The final time jump puzzle pieces surrounding Adrienne Kiriakis’ (Judi Evans) death are set to be revealed, which means Evans will make her official exit during the week of January 20-24. In an interview with Soap Opera Digest, Evans talked about what a crushing blow it was to leave Days behind.

When Evans first heart rumblings at the studio, she was absolutely floored. Evans first got tipped off to Adrienne’s looming demise by a couple crew members on set. She ended up cornering Co-Executive Producer Albert Alarr, who tends to be on the floor when they’re filming.

Alarr confirmed that Adrienne would be killed off, but he did his best to explain things to Evans and help her understand why.

Still, it was tough news to hear. “It’s pretty devastating,” Evans said. “I can’t lie. You don’t know what to think … It’s like a part of your life, a big part, is gone.” Evans added that the whole thing sent “a cold shiver” down her spine. She just never even considered the possibility that Days of Our Lives would kill her longtime character, but they certainly did.

Once Evans got over the shock, she began trying to accept DOOL’s decision. It wasn’t easy since she adored being part of the Days team. “It’s just sad, because I loved working there,” Evans admitted. “And there are not a lot of roles for women my age, so that makes it a little harder.”

Many Days of Our Lives fans were upset over losing Adrienne, who was one half of a supercouple with Justin Kiriakis (Wally Kurth). It’s a shame since Evans clearly wanted to remain in the role.

At the same time, Adrienne’s demise has provided and will continue to provide some gripping drama. Evans acknowledged that she understood why the decision was made.

“It was a sacrifice for the show, a good sacrifice, and it truly makes sense,” Evans said. She added that the hardest part of her exit scenes was trying not to react to her costars!

Evans obviously had to stay very still since Adrienne was supposed to be lifeless. She found it difficult since Wally Kurth (Justin Kiriakis), Freddie Smith (Sonny Kiriakis), Matthew Ashford (Jack Deveraux) and Mary Beth Evans (Kayla Brady) delivered such incredible performances – which Days viewers will be treated to soon.