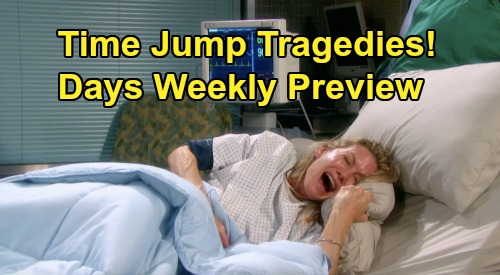 Days of Our Lives (DOOL) spoilers tease that viewers are going to get a lot of their questions answered during the week of January 20, so it’s a week that you won’t want to miss. The show embarked on an historic time jump last November, where storylines advanced by a year…all in one instant on the show. That has led to some creative storytelling where viewers have seen the outcomes of events before seeing the events leading up to those outcomes.

Well, the new DOOL promo for the week of January 20th promises that “all of your time jump questions are about to be answered,” and the promo is action-packed, so let’s get right into what it promises. First off, the promo addresses the death of Haley Chen (Thia Megia). It’s been known for some time that Kristen DiMera (Stacy Haiduk) killed Haley, and the promo shows some glimpses of how that happened.

Kristen is shown struggling with Haley in the hospital. According to DOOL spoilers, Kristen will be terribly upset after finding out that her baby died, and in her heightened emotional state, she’ll physically struggle with Haley, leading Haley to either fall or get pushed down a flight of stairs at the hospital. We can only surmise that Haley must hit her head pretty hard on the way down, leading to her death.

At any rate, the quick flashes of scenes showing Haley falling are pretty harrowing. We should note, though, that Kristen looks pretty horrified in the seconds after Haley falls, which points to Kristen not having pushed Haley intentionally, but we’ll see what unfolds on the show. Kristen is also shown in her hospital bed, completely devastated and crying, where Days of Our Lives spoilers say that she’ll end up after Haley’s accident.

The promo additionally shows a flash of Abigail DiMera (Kate Mansi) finding Haley at the bottom of the stairs, as well as JJ Deveraux (Casey Moss) embracing Haley’s lifeless body at the hospital. It’s going to be difficult to watch as JJ is forced to say goodbye to his beloved Haley, and as Kristen and Brady Black (Eric Martsolf) must face the death of their little girl.

The promo also quickly flashes to a scene of Xander Kiriakis (Paul Telfer) holding a baby in his arms at the hospital, as if he’s just done or is about to do something unimaginable. As it turns out, on Victor Kiriakis’ (John Aniston) orders, Xander will perpetrate a baby switch at the hospital.

Exactly how it’s all going to go down remains to be seen, but the baby that actually dies will not be Kristen’s – it will be Sarah Horton’s (Linsey Godfrey) baby. Somehow, Xander and Victor will be privy to the fact that Sarah’s baby has died, and Xander will make the big switch. And nobody will be the wiser.

Finally, the new Days of Our Lives promo addresses the death of Adrienne Kiriakis (Judi Evans). The promo flashes to scenes of total devastation, with Sonny Kiriakis (Freddy Smith) sobbing and someone covering Adrienne’s body with a sheet at the hospital. Adrienne will die as a result of injuries sustained in a car accident that occurs as she’s driving Sarah to the hospital as Sarah’s in labor.

In the promo, Adrienne is shown driving while Sarah’s on the phone with someone from the passenger seat telling them that she’s in labor. As they’re driving along, Adrienne starts honking at another car like crazy, and viewers see Will Horton (Chandler Massey) driving in another car as he’s looking at his phone – clearly a case of distracted driving, which must be what everyone will think causes the accident.

However, Days of Our Lives spoilers indicate that it actually won’t be Will who will be responsible for Adrienne’s death – it will be Maggie Kiriakis (Suzanne Rogers) who will also be on the scene in another car, driving drunk. Xander and Victor will be responsible for this coverup too, although how they’re going to make it seem like Will and not Maggie caused the accident remains to be seen.

The promo shows Maggie in bed passed out, presumably shortly after the accident, with Victor at her side kissing her hand. It appears that Maggie will have been blacked out drunk during the incident, which would explain why she doesn’t remember killing Adrienne or the accident.

That’s a lot for one week so viewers should gear up to see a lot of things explained in short order. Of course, there may still be some unanswered questions after the week is through, but it looks like as far as Haley’s death, the baby switch/death, and Adrienne’s death, viewers will get a lot of answers!