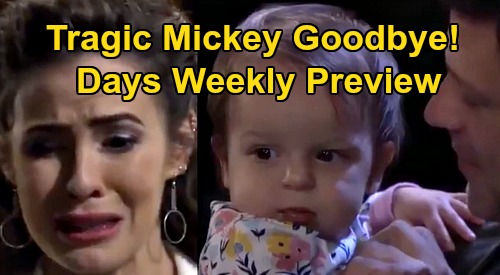 Days of Our Lives (DOOL) spoilers preview teases that a big truth will soon be revealed, and it’s going to seriously change the lives of several people in Salem. As DOOL viewers know, the little girl who Sarah Horton (Linsey Godfrey) and Eric Brady (Greg Vaughan) have been raising as their own is not actually their daughter – she’s the biological daughter of Kristen DiMera (Stacy Haiduk) and Brady Black (Eric Martsolf).

As it turns out, Xander Kiriakis (Paul Telfer) and Victor Kiriakis (John Aniston) did the unthinkable and switched babies after Sarah and Eric’s daughter passed away after suffering a seizure in the hospital nursery.

With the help of Dr. Amanda Raynor (Victoria Platt), Xander and Victor pulled off a baby switch that could have stayed a secret forever, had Nicole Walker (Arianne Zucker) not gotten involved.

But Nicole did get involved, and during the week of April 6th, the truth about who little Mackenzie “Mickey” Horton actually is – namely that she’s really Rachel Black – will all come out.

The new Days of Our Lives preview promo is all about this big revelation, and the promo offers some important details about how the truth is going to come out. And it’s all going to start with Nicole coming clean with Eric about what she now knows.

The promo shows a distraught Nicole telling Eric, “Mickey is not your little girl. She belongs to Brady and Kristen.” Eric looks absolutely gutted by the news, and he’s shown a bit later in the promo breaking down and sobbing.

While all this is going on, it looks like Xander will realize that something’s awry, and that Nicole may have figured out exactly what he and Victor did. Perhaps Xander will learn about Nicole’s trip to New York, where Dr. Raynor was hiding out.

At any rate, Xander is shown in the promo emphatically telling Victor, “I think maybe they know about the baby switch!” Victor looks horrified by that news, and it makes sense that he would.

Victor obviously doesn’t want to get caught, but he also doesn’t want Maggie Kiriakis (Suzanne Rogers) to learn that horrible truth that her granddaughter died as a result of the crash she caused when driving drunk. Victor will know that the baby switch secret, if revealed, will almost surely lead to Maggie learning that she’s responsible for the real Mackenzie’s death.

The action will continue, as Eric processes the terrible news he’s heard from Nicole. Eric will realize that someone’s got to tell Sarah about the baby switch, and about the fact that her fiancé Xander was responsible for it.

While all this is happening, Sarah and Xander will be preparing for their wedding. It looks like the wedding will be just moments from happening when Eric finds Sarah and lays the truth on her.

The weekly preview shows Sarah crying and on the verge of breaking down as Eric tells her that the babies were switched…on purpose. Meanwhile, Xander is shown holding Mackenzie happily, with each of them dressed up and ready for the wedding. Something tells us that a terrible scene will be coming between Sarah and Xander.

Finally, the new DOOL promo gives viewers a glimpse of Eric’s grief and sadness morphing into anger, as he says to himself, “Xander knew the truth. I’m going to kill him.”

The scene then flashes to Eric punching Xander, which appears to take place as Xander is awaiting his wedding to Sarah to begin. It’s going to be quite the scene.

At any rate, the baby swap storyline is really going to come to a head this week, so make sure you stay tuned to the NBC soap! Keep watching Days of Our Lives and we’ll keep you updated on the latest sizzling DOOL spoilers and news.