Days of Our Lives Spoilers: Stefano’s Microchip Implanted Into Stefan DiMera – The Phoenix Rises Again As His Own Son? 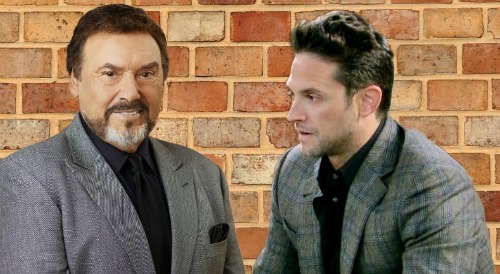 Days of Our Lives (DOOL) spoilers tease that Stefano DiMera (Joseph Mascolo) aka Steve Johnson (Stephen Nichols) will see that the end of the road is coming…at least for now. Now that Stefano has been captured and hauled off to University Hospital for treatment, he’s going to realize that his time inhabiting Steve’s body is about to come to an end. It’s going to be a terrible blow for Stefano, who desperately wants to stick around and rule his empire once again.

Well, that’s not going to be possible, given the army of people who are keen on seeing Steve return. According to Days of Our Lives spoilers, “Stevano” will soon have surgery, which will be performed by Kayla Brady (Mary Beth Evans), to restore him back to his old self.

That means that the microchip that turned Steve into Stefano will be removed, and that begs the question – where will that microchip go?

We all know that Dr. Wilhelm Rolf (William Utay) is fiercely loyal to the Phoenix, and that he’d do anything he can to see to it that Stefano lives again. And according to DOOL spoilers, Stefano himself will vow to return again.

It looks like Stefano will gather his available children together and proclaim that the Phoenix will rise again. And thanks to Dr. Rolf, Stefano probably will.

But that means that Dr. Rolf would need to find another body for Stefano to inhabit, and he’d probably need to do all of this on the sly. Of course, Kayla probably won’t want to hand over the microchip that she removed from Steve’s brain, but even if she doesn’t, it’s quite likely that Dr. Rolf has a backup. You can always count on Dr. Rolf!

Perhaps Dr. Rolf will turn to someone DOOL fans know and love to be the next host for Stefano’s “essence.” It’s a bizarre possibility, but we know that Stefan DiMera (Brandon Barash) will be returning to canvas in short order…could Dr. Rolf be planning to implant Stefano’s consciousness into Stefan?

The timing would certainly fit, since Stefan is supposed to be returning sometime later in April, and since Stefano’s microchip is about to be removed from Steve’s brain. What if Dr. Rolf has a very much alive Stefan stashed someplace, and he decides to use Stefan’s body as Stefano’s next host?

It would make sense that Stefano would want to return asap, in order to exact revenge on John Black (Drake Hogestyn) for rescuing Marlena Evans (Deidre Hall) from his clutches. Stefano could even hide, pretending to be Stefan while Gabi DiMera (Camila Banus) slowly figures out that something just doesn’t seem right with Stefan.

As Stefan, Stefano could even potentially return as CEO of DiMera Enterprises if he plays his cards right. Stefano could reclaim his business empire, but the trick would be pretending to be Stefan…the son he never met. That could prove to be difficult, but it would certainly be interesting to watch Stefano try!

What’s your take? Do you think that Stefano’s next host could be Stefan? Stay tuned to Days of Our Lives, and we’ll keep you up to date on the latest DOOL news as it comes in. Here at CDL, we’ve got the latest DOOL update