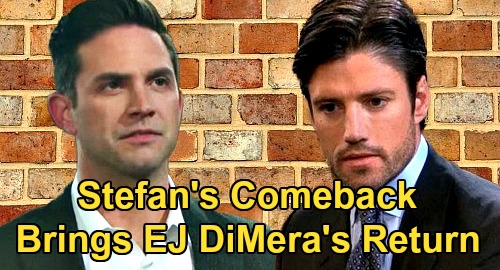 Days of Our Lives (DOOL) spoilers tease that Stefan DiMera’s (Brandon Barash) return is just around the corner. DOOL’s staying hush-hush about how Stefan survived and why he’ll suddenly pop up again, but their spring preview video offered a first glimpse of the “dead” DiMera. Gabi Hernandez (Camila Banus) will soon spot Stefan gazing back at her in a store window, so she’ll be caught off guard.

Since Stefan won’t be there when Gabi turns around, this may be a vision. Perhaps Gabi and Stefan’s connection is so strong that Gabi will just be able to sense him…out there…somewhere… Of course, we have to wonder: why now? Maybe Stefan has only just recovered enough for Gabi to pick up on things.

However, there’s no need to overthink it! The real reason behind Stefan’s sudden comeback is Days made a mistake in killing Stefan off and this is when they were able to correct it. They’re simply going to come up with some crazy explanation and make this fit. Who cares as long as we get Stefan and a “Stabi” reunion?

It’ll take some time, but Gabi and Stefan seem poised to be a DiMera powercouple again. With Gabi’s help, Stefan may become the top dog of the DiMera world. Naturally, this would be a great time for Days of Our Lives to think about an EJ DiMera recast.

Stefan needs a worthy adversary – someone just as charming and ruthless. EJ was certainly both of those things and could be a good rival for Stefan.

Plus, Stefan needs to get to know his brother. Family ties are important, so this would be an excellent opportunity to bring in a complicated sibling rivalry. Stefan already has a complex relationship with Chad DiMera (Billy Flynn), but Chad’s too nice to really go up against him – at least when he’s not brainwashed! Now that Chad’s himself again, he just isn’t a solid Stefan opponent.

For whatever reason, Days has been taking their sweet time about bringing EJ back into the picture. They took the first step by rewriting it so EJ survived, but they need to pull the trigger on recasting the role.

Days of Our Lives spoilers say Sami Brady (Alison Sweeney) will return down the road, so she’ll hopefully have some EJ updates. It doesn’t look like Sami will have EJ with her for her next trip home, but what about the one after that?

DOOL could easily lay the groundwork while Sami’s in town. Perhaps Sami will spar with Stefan and pass her hatred once she reconvenes with EJ in Europe. That’d give EJ a motive to go after Stefan at some point. That’s especially true if EJ decides he wants to do things his way at DiMera Enterprises.

Bottom line, Stefan’s return is great news, but throwing EJ in the mix could make it even better! Days spoilers say some twists and turns are brewing, so stay tuned. CDL’s the place to be for exciting Days of Our Lives spoilers, news and updates.