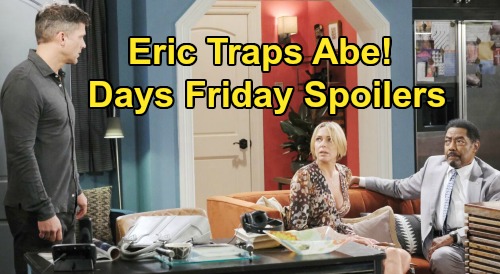 Days of Our Lives (DOOL) spoilers for Friday, April 3, tease that Abe Carver (James Reynolds) will find himself in a tight spot. Eric Brady (Greg Vaughan) grew concerned after Brady Black (Eric Martsolf) admitted Nicole Walker (Arianne Zucker) didn’t have Basic Black business in New York. Nicole has lied to Eric in the past, but he really thought they were done keeping secrets from each other.

However, Eric had a troubling thought soon after. He remembered Nicole hiding those test results and feared Nicole might be seeking a second opinion. Eric’s worried Nicole may be seriously ill and keeping quiet – just so she doesn’t pile anything else on him.

Since Eric confronted Abe about the reason for Nicole’s trip, Abe will have to decide how he’s going to respond.

“Honest Abe” isn’t the kind of guy who usually lies, so he may suggest Eric should wait for Nicole to tell him what’s up. Of course, that may raise Eric’s concerns even more.

Days spoilers say Nicole will be on her way home with the truth soon. She got confirmation that Eric and Sarah Horton’s (Linsey Godfrey) baby died that fateful night, so Nicole’s got a tough task ahead of her.

Other Days of Our Lives spoilers say Brady will ponder his latest discovery. It threw Brady for a loop when he saw that familiar birthmark on Mackenzie “Mickey” Horton’s neck.

It’s identical to the one Rachel DiMera Black had, so Brady will begin battling suspicions. He won’t tell Kristen DiMera (Stacy Haiduk) anything just yet, but Brady will indeed start to suspect a swap went down.

Meanwhile, Kristen will strengthen her bond with Tony DiMera (Thaao Penghlis). DOOL fans know family loyalty is important to Kristen, so she’s like Stefano DiMera (Stephen Nichols) in that way. Nevertheless, even Kristen can agree that Stefano’s gone off the rails this time.

At the same time, Kristen can’t help but love her father. Days of Our Lives spoilers say Kristen and Tony will connect over their complex relationships with Stefano. It’s not easy being a DiMera, but that’s something they’ll be able to bond over in Friday’s DOOL episode.

Days spoilers suggest things will become even more complicated as Kristen, Tony and Chad DiMera (Billy Flynn) say goodbye to Stefano next week. Stefano will ultimately be transformed into Steve Johnson again, so we’ll give you updates as other news rolls in. Are you eager to see Steve come back to his loved ones? Be sure to check back frequently for hot Days of Our Lives spoilers, news and updates.