BY hellodrdavis on April 2, 2020 | Comments: one comment
Related : Days of Our Lives, Soap Opera, Spoiler, Television 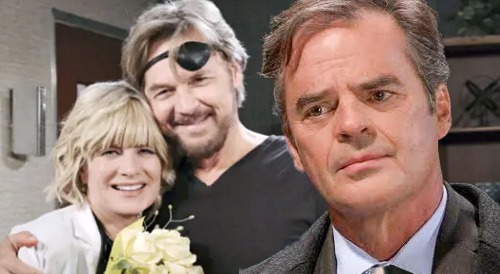 Days of Our Lives (DOOL) spoilers tease that Justin Kiriakis (Wally Kurth) will have some big decisions to make in the upcoming days. As DOOL viewers know, Justin is very concerned about what’s going to happen with Stefano DiMera aka Steve Johnson (Stephen Nichols) in the coming days. “Stevano” has just been brought into University Hospital, and the plan will be for him to have surgery in order to remove the chip that turned him into Stefano.

Justin feels great compassion for Steve, and he truly wants Steve to return to his family and friends. But Justin also realizes that once Steve does return, there’s a good chance that he’ll want to reunite with Kayla Brady (Mary Beth Evans) – in fact, when Steve does fully return, he may not even realize that he’s divorced from Kayla. DOOL viewers will remember that the divorce was orchestrated by Stefano, so Steve likely never consented to the split.

Well, DOOL spoilers indicate that it will be a while before Steve returns to normal and fully remembers his love for Kayla. And that will give Justin plenty of time to think about what he’s going to do with respect to Kayla. Kayla has told Justin that she’s committed to him no matter what happens with Steve, but Justin isn’t so sure about what’s going to happen, and he’ll seek out some of his friends for advice the coming days.

Days of Our Lives spoilers say that Justin will have a heart-to-heart with Jennifer Deveraux (Melissa Reeves) about the situation, as well as with Jack Deveraux (Matthew Ashford). Interestingly, Jack will have a surprising perspective on the situation, as he’ll encourage Justin to fight for Kayla. One might think that Jack would support Kayla ending up with his brother Steve, but he won’t.

Of course, Jack and Justin have become friends, and Jack has seen just how happy Kayla has been with Justin over the past few months. And Jack might also point out that Steve isn’t totally innocent when it comes to his relationship with Kayla. After all, Steve did willingly stay away for months on end before he was captured by Stefano.

Now, it’s not Steve’s fault that Stefano victimized him, but it’s not like things were 100% perfect with Steve and Kayla’s marriage at that point. So, it seems that Jack will think that Justin has a fighting chance when it comes to holding onto Kayla, and he’ll encourage Justin to fight for his love.

It will be interesting to see what happens once Steve’s back and fully functioning, and just how much he fights for Kayla versus how much Justin fights for her. Do you think that Justin will back down right away, or will he do as Jack suggests and fight for Kayla? Stick with the NBC soap and be sure to keep CDL bookmarked so you don’t miss the latest Days of Our Lives news and spoilers.