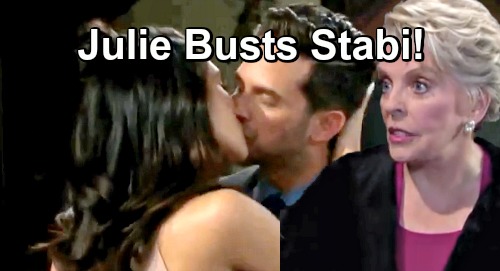 Days of Our Lives (DOOL) spoilers tease that Stefan DiMera (Brandon Barash) will remain captivated by Gabi Hernandez (Camila Banus). She’s got a grip on his heart and won’t let go. Of course, Stefan’s slowly winning Gabi over as well. She sees a side of Stefan that no one else sees. Gabi set out to marry Stefan and destroy him, but it’s clear that her goals are starting to shift.

Unfortunately, Brady Black (Eric Martsolf) could cause a “Stabi” setback. On July 8, Days spoilers say Brady will fill Chloe Lane (Nadia Bjorlin) in on Gabi’s scheme. She’ll have a choice to make at that point. Chloe formed a connection with Stefan, but he was sleeping with Gabi behind her back.

It doesn’t matter that Gabi’s plot set that in motion. Stefan still made the decision to hook up with Gabi repeatedly. With that in mind, Chloe may think Stefan deserves whatever he’s got coming. She might feel like Gabi did her a favor on some level. Once Chloe hears that a takedown was the intention, she may soften toward Gabi’s role in the whole thing.

However, Chloe could battle guilt eventually. Days fans know Stefan was there for Chloe and the kids when they needed him. He was thoughtful and charming, so Chloe may start remembering the good times. It could make her tempted to warn Stefan about Gabi’s plot.

Whatever the case, it looks like Chloe will sit on this secret for a while. She’ll need time to mull over how she should handle it. Until then, Gabi will keep reeling Stefan in as she faces her own growing feelings. Days of Our Lives spoilers say their passion will rev up more than ever before.

Stefan and Gabi will even make out somewhere a bit dangerous! They’ll have an intense kissing session in Julie Williams’ (Susan Seaforth Hayes) office. Julie hates Gabi’s guts, and she’s certainly not too fond of Stefan either. She’ll undoubtedly wonder what they think they’re doing.

Julie may give them an attitude and suggest they were meant for each other. One horrible person deserves another in Julie’s mind. Regardless, Julie won’t appreciate their PDA in her workspace. If they want to make out somewhere, she’d rather it be on the other side of town.

DOOL spoilers hint that Gabi and Stefan won’t pay much attention to Julie’s outburst. They feel how they feel, and Julie’s criticism isn’t going to change that. As for Chloe, will she drop Gabi’s bomb or decide to let it go? If Chloe comes clean, can Gabi explain her position well enough to preserve her shot with Stefan?