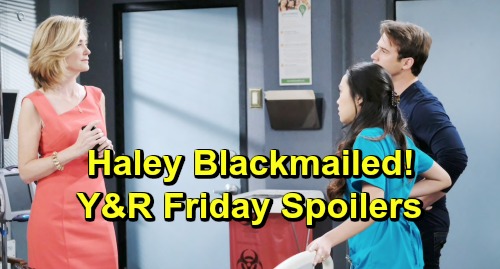 Days of Our Lives (DOOL) spoilers for Friday, May 10, tease that Nicole Walker (Arianne Zucker) will keep shutting Eric Brady (Greg Vaughan) out. She recently ripped into Eric for not protecting Holly Jonas (Harlow and Scarlett Mallory) like he promised. Despite Eric’s attempts to explain and comfort her, Nicole is determined to blame him for Holly’s devastating “death.”

DOOL fans can expect Nicole to stand her ground on Friday. She’ll seek comfort in Brady Black’s (Eric Martsolf) arms, so that’ll bring some close moments for these exes. Days spoilers say Xander Cook (Paul Telfer) will find Nicole leaning on Brady. He’ll undoubtedly pester them and perhaps hint at the leverage he still has on Nicole, which he’ll reveal in the week ahead.

In the meantime, Haley Chen (Thia Megia) will get a harsh ultimatum. Eve Donovan (Kassie DePaiva) just cornered Haley with the recording Claire Brady (Olivia Rose Keegan) passed along. Since Claire doesn’t want Tripp Dalton (Lucas Adams) to land in prison, this is how Eve plans to work around it. She’ll push Haley to end the marriage and once again put herself at risk of deportation.

Eve will go public with the sham marriage proof unless Haley takes matters into her own hands. Haley won’t want Tripp behind bars either, so a stunning announcement’s on the way. It sounds like Haley will claim she duped Tripp to secure her green card but can no longer live with the guilt.

Other Days of Our Lives spoilers say Maggie Kiriakis (Suzanne Rogers) will battle temptation. She was already tempted to drink at the mansion, but she’ll come close to throwing one back at Doug’s Place this time. When Nicole shows up and has a coughing fit, she’ll grab Maggie’s glass to get it under control. Nicole will be taken aback when she realizes Maggie’s got vodka instead of water.

Maggie thankfully won’t take a sip herself, but Nicole will still push her to get out of there. She’ll understand that Maggie’s grieving, but she won’t think drinking again is the way to deal with that. Days of Our Lives spoilers state that Maggie will appreciate the support, but moving past this loss isn’t going to be easy.

Of course, DOOL viewers know Holly is alive and well, so good news is waiting at the end of this storyline. We’ll give you updates as other Days details emerge. Stay tuned to the NBC soap and don’t forget to check CDL often for the latest Days of Our Lives spoilers, updates and news.