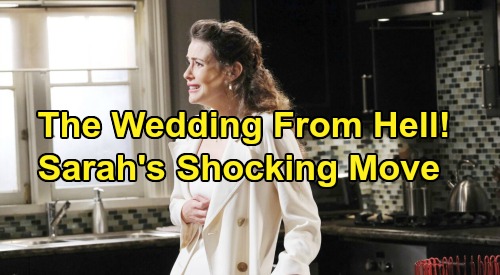 Days of Our Lives (DOOL) spoilers tease that Sarah Horton (Linsey Godfrey) is soon going to have a really rough time. As DOOL viewers know, Sarah and Xander Kiriakis (Paul Telfer) are gearing up for their wedding ceremony, but things aren’t going to go smoothly by any means. It looks like a serious wedding day fiasco is going to go down for Sarah and Eric, and at the end of the day there will be devastation all around.

First off, as the wedding nears, Eric Brady (Greg Vaughan) will be getting some horrific news. In a moment alone with Nicole Walker (Arianne Zucker), Eric will learn the real reason for Nicole’s trip to New York.

Eric will learn that Nicole met with Dr. Amanda Raynor (Victoria Platt), and that Dr. Raynor admitted that the real Mackenzie “Mickey” Horton died after a seizure in the hospital nursery.

Then Eric will learn from Nicole that Xander and Victor Kiriakis (John Aniston) switched babies, and that the little girl that everyone has been calling Mackenzie is actually Rachel Black, the daughter of Kristin DiMera (Stacy Haiduk) and Brady Black (Eric Martsolf).

Eric will be devastated, not to mention furious with Xander, but his first priority will be to tell Sarah the horrible news.

Well, DOOL spoilers say that Nicole and Eric will intercept Sarah just before the wedding. Dressed in her white suit for the wedding, Sarah will have to hear from Eric that the babies were switched in the nursery, that the real Mackenzie died, and that Xander was the one behind the switch. It’s all going to be a lot for Sarah to take.

Now, exactly what happens from there remains to be seen. One thing that seems pretty clear at this point is that Xander will be feeling the pressure in the hours leading up to the wedding.

Xander will share with Victor that he thinks that “they” might know about the baby switch. It also appears that Xander will have a terrible nightmare about Sarah, which could be about her dumping him at the altar.

At any rate, the DOOL spring promo showed a scene of Sarah and Xander looking like they were about to share vows, but that could be the dream sequence of Xander’s.

This seems likely, considering that Days of Our Lives preview for the week of April 6th shows Sarah finding out about the baby switch in Eric’s apartment, presumably after Eric and Nicole intercept Sarah before the wedding.

It’s pretty hard to imagine Sarah walking down the aisle with Xander after learning about the baby switch, and other parts of that DOOL weekly promo show Eric rushing Xander and punching him out as he stands in the Kiriakis living room all dressed up and ready for the wedding.

So exactly how it’s all going to play out remains a mystery at this point, but one thing looks pretty certain – there’s going to be some big drama for Sarah, Xander, and everyone else.

Days spoilers also point to Sarah having a serious emotional breakdown as a result of everything she learns, and it’s easy to understand why. Sarah’s going to learn not only that her baby is dead, but that the baby she’d bonded with over the last year needs to be handed over to Kristen and Brady.

Plus, Sarah will feel deep betrayal from Xander and Victor, and she’ll realize that Maggie Kiriakis (Suzanne Rogers) caused the death of the real Mackenzie.

But as far as this wedding between Sarah and Xander…well, it just seems doomed at this point. It looks like Xander will have a rude awakening, as he watches his carefully laid plans utterly fall apart and he loses everything.

Stick with CDL for your up-to-the-moment DOOL spoilers, news, and updates. Here at CDL, we will be sure to keep you informed as we learn the latest!