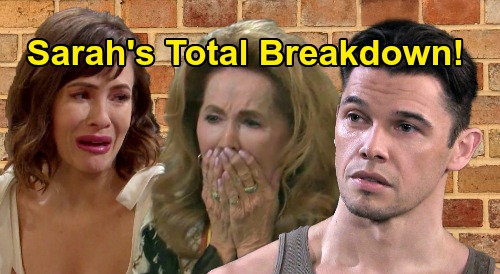 Days of Our Lives (DOOL) spoilers tease that the baby swap drama is about to come to a head. As DOOL viewers know, the little girl that Sarah Horton (Linsey Godfrey) and Eric Brady (Greg Vaughan) have been raising as their own is not actually their daughter. Sarah and Eric’s daughter died in the hospital nursery, apparently because of the trauma that Sarah and the baby suffered in the car accident that they were involved in earlier that evening.

Well, as DOOL viewers know, someone is currently in the process of unraveling Xander and Victor’s big baby swap secret…Nicole Walker (Arianne Zucker). And according to DOOL spoilers, Nicole will soon track down Dr. Raynor (Victoria Platt) and get her confession about helping Xander and Victor switch the babies. From there, it’s only a matter of time before Eric and Sarah get the worst news of their lives.

For Eric, there will be some terrible moments and a tearful goodbye with Mackenzie “Mickey” Horton, who isn’t really Mackenzie at all. He’ll obviously be in a great deal of pain, but for Sarah, the situation is going to be compounded.

Sarah carried her baby, the original Mackenzie, and to learn that the baby she’s been raising wasn’t actually hers will be at terrible blow.

But then she’ll learn that the baby switch wasn’t a simple mix up – and that Xander and Victor were behind it. Sarah will surely feel betrayed by Xander, and she’ll have to come to terms with the fact that the man she loved would do something so horrible to her.

Sarah will probably feel that she was deprived of saying goodbye to her daughter after her death, and it’s clearly going to be a bad scene when she and Xander face off.

And the big question she’s going to have for Xander us why he would do something so terrible in the first place. DOOL spoilers say that Sarah is in for a major shock that comes after the initial baby swap reveal, and it makes sense that she’ll be absolutely stunned and horrified when she finally learns exactly why Xander and Victor switched the babies.

Sarah will learn that the car accident, caused by Maggie’s drunk driving, caused her daughter’s death. That, combined with having just found out that her daughter died and that the man she loves concealed that from her, is going to be too much for Sarah to handle.

Days of Our Lives spoilers say that Sarah will have a major breakdown after all these compounding reveals, and it’s easy to understand why!

Will Sarah even be able to function after all of this comes out? One would imagine that she’d want to confront her mother at some point, which will probably be an awful scene in its own right. At any rate, Sarah’s going to be in for a world of hurt. It certainly looks like some riveting and heartbreaking scenes are ahead. Stick with DOOL and keep consulting CDL for the latest Days of Our Lives spoilers and news. We’ll keep you updated with the latest on all the soaps.