BY hellodrdavis on March 30, 2020 | Comments: one comment
Related : Days of Our Lives, Soap Opera, Spoiler, Television 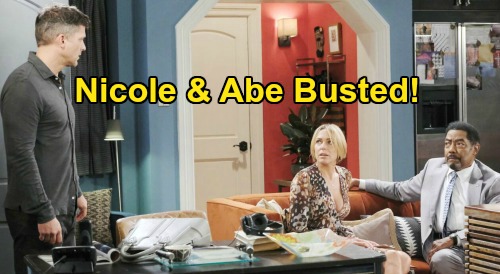 Days of Our Lives (DOOL) spoilers tease that Eric Brady (Greg Vaughan) will get some horrific news in the coming days. As DOOL viewers know, the little girl whom Eric thinks is his daughter Mackenzie “Mickey” Horton is, in fact, the biological daughter of his brother Brady Black (Eric Martsolf) and Kristen DiMera (Stacy Haiduk). Nicole Walker (Arianne Zucker) is on the verge of getting confirmation that the babies were switched in the nursery, and soon she’ll have to tell Eric the truth.

Of course, Nicole has had her suspicions about the babies for a while now, but she hasn’t said anything to Eric about her theory. Nicole is very sensitive to keeping secrets from Eric and she doesn’t like to do it, but given that her theory would have serious ramifications for a lot of people if true, she wants to keep it under wraps for now.

According to Days of Our Lives spoilers, Nicole will soon get confirmation of her suspicions when she and Abe Carver (James Reynolds) track down Dr. Raynor (Victoria Platt) – the doctor who helped Xander Kiriakis (Paul Telfer) and Victor Kiriakis (John Aniston) switch babies in the nursery. Dr. Raynor will confess to the whole thing, and Nicole will finally know the truth.

Well, while all of this is going on, Eric will realize that something is going on between Abe and Nicole. According to Days of Our Lives spoilers, Eric will realize that Nicole is hiding something from him, and he’ll quiz Abe about what’s going on, which will eventually prompt Nicole to reveal the truth to Eric – that the baby they’ve been calling Mackenzie is not his daughter with Sarah Horton (Linsey Godfrey), but belongs to Brady and Kristen.

That’s going to be a huge blow for Eric, who soon thereafter will have a tearful goodbye with the little girl that he loves and saw through cancer treatment. He’ll be heartbroken as he and Sarah Horton (Linsey Godfrey) have to hand over the baby to Brady and Kristen. DOOL viewers can expect some heartbreaking scenes here.

But other DOOL spoilers suggest that Eric will soon get some perspective when he’s spending time with Nicole and Holly Jonas (Harlow and Scarlet Mallory). In a sweet scene, Holly will spontaneously hug Eric and say, “I love you, Daddy.” Of course, no child can replace the baby that he lost, but it seems that Eric may realize that he still has an opportunity right in front of him to be a father.

At any rate, Eric’s heartbreak should be palpable, and let’s hope that he realizes that Nicole wasn’t keeping things from him for malicious or selfish reasons. He’ll really need her support in the days to come. Stay tuned to Days of Our Lives and keep CDL bookmarked for all the latest DOOL spoilers and news.