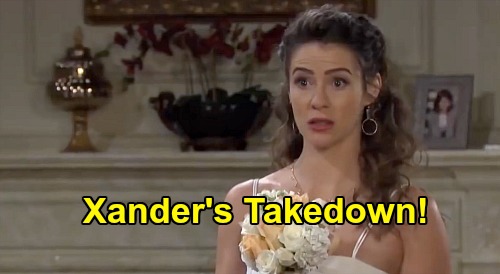 Days of Our Lives (DOOL) spoilers tease that Nicole Walker (Arianne Zucker) will enact a plan to prove her baby swap suspicions. As DOOL viewers know, Nicole has just got the results back from the secret DNA test that she had performed to see if Mackenzie “Mickey” Horton was Kristen DiMera’s (Stacy Haiduk) daughter. The results showed no match.

Of course, that’s because Xander Kiriakis (Paul Telfer) paid off a lab tech to return results to Nicole showing that Mackenzie and Kristen weren’t a match. But Nicole suspects foul play. Sure, she could have another DNA test done, but she knows that Xander would probably find a way to tamper with that test, too.

Well, as DOOL viewers will remember, Nicole had a talk with Abe Carver (James Reynolds), during which she told Abe all about her baby swap theory and her suspicion that Mackenzie is actually Kristen and Brady Black’s (Eric Martsolf) daughter. Abe was stunned, and he wondered what Nicole was going to do next.

And that’s when Nicole decided to quietly track down Dr. Raynor (Victoria Platt) – the doctor whom Nicole suspects knows something about the baby switch. Of course, Dr. Raynor knows everything about that switch, since she helped Xander and Victor Kiriakis (John Aniston) carry it out. Nicole’s clearly onto something here.

And Nicole knows that she owes it to Eric Brady (Greg Vaughan) and everyone else involved to see this through to the end. Eric and Sarah Horton (Linsey Godfrey) need to hear the truth, even if it’s painful.

Of course, most DOOL fans can agree that Brady and Kristen deserve to be reunited with their daughter. Several characters will be affected by what Nicole does next, but she’ll believe it’s the right thing to do.

In fact, Days of Our Lives spoilers say that Abe will ultimately help Nicole as she moves forward in her quest to find Dr. Raynor. Perhaps Abe will make a few calls and be able to help Nicole track the doctor down, or he may help in other ways.

But Abe will apparently think that this matter is important enough to help, and he’ll probably also be worried about Nicole facing danger from Xander, so he’ll be on board.

DOOL spoilers indicate that Nicole will have success in tracking Dr. Raynor down, and it doesn’t look like it will take too much convincing for Dr. Raynor to crack under the pressure.

Nicole will indeed get the doctor to admit that Sarah and Eric’s baby died, and that a baby switch occurred soon thereafter. Nicole will have confirmation of her theory, and the next step will likely be getting Dr. Raynor to go on record.

At any rate, thanks to some help from Abe and some quick thinking, Nicole will have the evidence she needs to blow this secret wide open. Unfortunately, though, some people close to Nicole are going to get hurt in the process.

Stay tuned to the NBC soap, and we’ll provide all the latest DOOL news and story developments. Stick with CDL for other hot Days of Our Lives spoilers, news and updates.