Days of Our Lives Spoilers: Eric Uncovers Mickey-Rachel Swap Truth – Dad’s Worst Nightmare, Wrestles Over What to Do with Secret 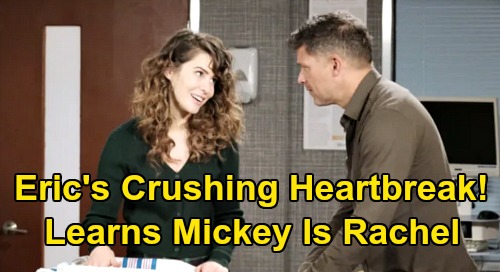 Days of Our Lives (DOOL) spoilers tease that Eric Brady (Greg Vaughan) will make an upsetting discovery. During the week of March 30-April 3, Eric will realize Nicole Walker (Arianne Zucker) deceived him. He’ll get a clue about a lie that Nicole told him – whether that lie’s already been told or happens sometime between now and then.

Either way, Days of Our Lives spoilers say this lie will tie in with Mackenzie “Mickey” Horton, although Eric may not be sure how. Nevertheless, Eric will know Nicole’s been dishonest once again – and he certainly won’t be happy about that.

Eric really thought they were past keeping major secrets from each other, so it’ll be tough for him to wrap his head around Nicole’s deception.

Soon after Eric’s discovery, he’ll confront Abe Carver (James Reynolds) about what he knows. That could mean that Abe himself will inadvertently tip Eric off to the lie. It’s also possible Eric just won’t think he can trust Nicole to give him the whole story. Eric may feel like “Honest Abe” is the way to go at this point.

Whatever the case, there’s a good chance Abe will either come clean about Nicole’s suspicions or push Nicole to come clean herself. No matter how this plays out, it looks like Eric will face the baby swap bomb. Days of Our Lives spoilers say Eric will wrestle with the truth during the week of April 6-10.

By then, Abe and Nicole may have a confession from Dr. Raynor (Victoria Platt) or something else to back up Nicole’s hunch. Once Eric gets updates on how Nicole arrived at her conclusion, he may not be as angry that she kept this news from him. At least Eric’s outrage should die down a bit!

After all, Xander Kiriakis (Paul Telfer) ordered the lab tech to change the test DNA results. When Nicole opened them, the results said Mickey was NOT a match for Kristen DiMera (Stacy Haiduk).

Technically, there wasn’t a secret to tell – not until Nicole followed up on her suspicions. Xander’s been working to thwart Nicole at every angle, so it looked like Nicole was wrong on the surface.

However, Nicole’s always been a DOOL schemer at heart, so she knows when she’s being manipulated! Once Nicole explains, Eric may see that Nicole was just being diligent and trying to gather all the facts – which wasn’t easy thanks to Xander. Of course, Eric may also go easy on Nicole due to his own predicament.

If Eric’s going to wrestle with the truth, that should mean he’ll consider keeping it under wraps. What would Eric be wrestling with otherwise? Days spoilers say it’ll break Eric’s heart to think about giving up Mickey – and he’ll worry about how the truth will affect Sarah Horton (Linsey Godfrey), too.

At the same time, how can Eric leave Kristen and Brady Black (Eric Martsolf) in the dark? Eric’s seen how heartbroken they’ve been over Rachel DiMera Black’s “death.” Days spoilers state that Eric will be in a terrible situation, so it’ll be interesting to see what his next move is.

Will Eric confess the baby swap shocker to Brady or hide the truth? DOOL fans won’t want to miss all the hot action ahead. Stick with CDL for fantastic Days of Our Lives spoilers, updates and news.