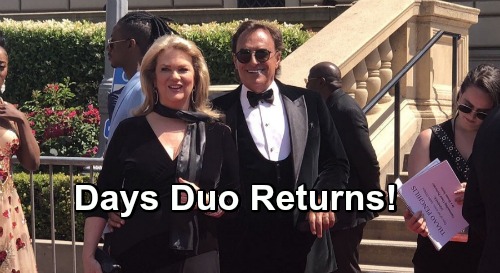 Days of Our Lives (DOOL) spoilers has some great news to pass on regarding two big summer returns. Thaao Penghlis (Tony/Andre DiMera) and Leann Hunley (Ana DiMera) will both be returning to canvas for July Sweeps 2019. This is great news for DOOL fans.

Thaao Penghlis made the announcement on Instagram the morning after appearing at the 46th Annual Daytime Emmy Awards. He posted a lovely photo of himself with Leann Hunley on the red carpet along with the following caption: “Thank you all from Leann & myself for your continued support. We had a great time celebrating Days & its nominees. You will see us on the screen in July. But is it Tony or Andre?”

The last time DOOL viewers saw Thaao on canvas was several weeks ago, when he appeared in a dream sequence when Marlena Evans (Deidre Hall) was having an out-of-body experience. Thaao portrayed both Tony and Andre in the sequence. As for Leann, she hasn’t appeared on DOOL since February 2018.

Of course, the last time we saw Leann’s character Ana, she was obsessed with carrying Tony DiMera’s ashes around with her in an urn. She addressed the urn as “Tony” and carried on conversations with him.

But Thaao’s Instagram message leaves open the possibility that Tony is somehow alive. Viewers will remember that Tony died back in 2009, after an accident on the pier. But considering that characters come back from the dead frequency on Days of Our Lives, it’s entirely possible that we could see Tony’s story pick back up.

It wouldn’t be too much of a stretch to think that Dr. Wilhelm Rolf (William Utay) could have had a “back to life” serum back in 2009 that he used on Tony. Of course, that would lead to a lot of questions, such as where Tony has been and what he’s been doing for the past decade.

On the other hand, Thaao could be returning as Andre. After all, DOOL viewers saw a room in the DiMera Nashville Warehouse with the initials “A.D.” on them, indicating that Andre was somehow brought back to life by Dr. Rolf. So, we could be looking at an Andre return.

And of course, there’s a third possibility…that Thaao will come back as BOTH Tony and Andre! Stranger things have happened, and it would certainly be an interesting situation to have both DiMera brothers back in Salem at the same time.

Leann’s return raises some interesting questions as well. Will she pick the romance back up with her ex-husband Roman Brady (Josh Taylor)? And how will she react to seeing Tony and/or Andre again?

Are you looking forward to seeing Thaao and Leann back on DOOL? Stay tuned to DOOL and don’t forget to check CDL often for the latest Days of Our Lives spoilers, updates, and news.

Thank you all from Leann & myself for your continued support. We had a great time celebrating Days & it’s nominees. You will see us on the screen in July. But is it Tony or Andre? #Days #NBC #love #romance #winning #vets #passion #Armani #style #fashion