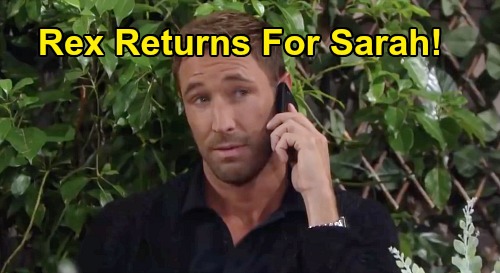 Days of Our Lives (DOOL) spoilers tease that Rex Brady (Kyle Lowder) will be making a return to the NBC soap soon. As DOOL viewers might be aware, Rex was recently shown in the DOOL spring promo. In the promo, Rex appeared to be sitting in the park on his phone and looking at someone inquisitively. So, when will Rex be back and what will he be returning to Salem for?

Well, one possibility is that Rex will return to help Sarah Horton (Linsey Godfrey) cope after she learns the devastating truth about her baby Mackenzie “Mickey” Horton.

As DOOL viewers are aware, it turns out that the baby everyone has been calling Mackenzie is actually the biological daughter of Kristen DiMera (Stacy Haiduk) and Brady Black (Eric Martsolf), and not the daughter of Sarah and Eric Brady (Greg Vaughan).

In the coming days, Sarah is going to be completely gutted by the news that Mackenzie isn’t really Mackenzie after all, plus she’ll hear that the baby swap in the hospital nursery wasn’t an accident, and that her fiancé Xander Kiriakis (Paul Telfer) deliberately switched the babies. It’s going to be a heartbreaking revelation for Sarah, and she’ll need some support.

Could Rex possibly return to Salem in order to help Sarah in her time of need? Days of Our Lives spoilers indicate that Sarah is headed for a major emotional breakdown, and it’s easy to understand why.

Sarah is going to have to hand her baby over to Kristen and Brady, come to terms with the fact that her baby died, and then she’ll probably want some answers about exactly how her baby died.

Sadly, it looks like Sarah will then learn about her baby’s seizure in the hospital nursery, and as a doctor she’ll probably quickly realize that the baby suffered distress due to the car accident that Sarah was involved in on the night of the delivery.

That will lead Sarah to figure out that Maggie Kiriakis’ (Suzanne Rogers) decision to drive drunk that night was directly related to the baby’s death, and that’s going to be a huge blow.

When Sarah ultimately breaks down over all of this, she’s going to need some help, so perhaps Rex will get called in to help her with the situation. Sure, Sarah and Rex aren’t close at this point, but they’ve been close in the past, and Sarah’s going to need someone for support. It’s not too much of a stretch that Sarah might let Rex help her in her time of need.

We’ll see exactly what happens here, but if Sarah is in bad shape, then it’s likely that, for example, Eric and Nicole Walker (Arianne Zucker) could call Rex to return to Salem to see if he can get through to Sarah. Sarah might be shutting other people out, and perhaps Rex would be able to get through to her.

Do you think that Rex will return to Salem to help Sarah through her difficult time? Stay tuned to the NBC soap and stick with CDL for all the hottest Days of Our Lives spoilers, updates, and news.