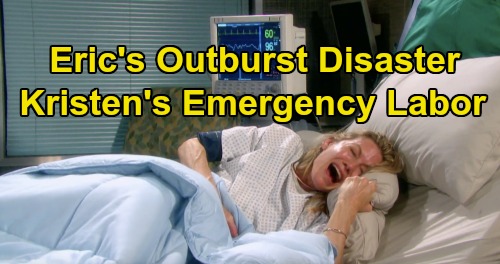 Days of Our Lives (DOOL) spoilers reveal that some shocking events played out on Mother’s Day, which happened offscreen due to the time jump. Thankfully, DOOL’s going to fill in the blanks during the week of January 20-24. They’ll cover plenty of bombshells and storylines, but let’s focus on an awkward get-together and how it set up disaster.

Kristen DiMera (Stacy Haiduk) has a pretty twisted history – especially when it comes to John Black (Drake Hogestyn) and Marlena Evans (Deidre Hall). They have every right to hate Kristen’s guts forever, so it should come as no surprise that they weren’t thrilled about their houseguest.

Brady Black (Eric Martsolf) was all in on his future with Kristen by then, so he invited her to the townhouse.

Days of Our Lives flashbacks will reveal what happened when a very pregnant Kristen showed up with Brady. As you can imagine, there was some serious tension. For whatever reason, Kristen hasn’t really been in Marlena and John’s orbit much lately.

It’s nice that DOOL is finally bringing their past into things and acknowledging this complex trio.

As for Brady, his goal was to help his parents tolerate Kristen. Brady was planning on living happily ever after with Kristen and their child. He wasn’t expecting John and Marlena to fawn all over Kristen, but he hoped this would be an important step forward.

Since Kristen was ready to turn over a new leaf and focus on their baby, she supported Brady’s plan. Kristen did her best to be kind and humble herself at this mini party.

Days of Our Lives spoilers say Marlena was rather prickly with Kristen, which we’ll see in these upcoming flashback scenes. As for John, he tried to ignore the fact that Kristen has been an unhinged nightmare over the years.

Brady’s plan ended up working out fairly well until Eric Brady (Greg Vaughan) joined the Mother’s Day bash with Holly Jonas (Harlow and Scarlett Mallory). Eric flew into a rage over Kristen’s presence, which led to Brady asking his brother to step outside.

Brady wanted a chance to calm Eric down and convince him to put past mistakes to rest.

Meanwhile, Kristen was probably still stressed from Eric’s outburst – and being left alone with Marlena didn’t help matters. It wasn’t long until Kristen’s water broke, which left Brady to leap into action.

Days spoilers reveal that they headed to the hospital, where Kristen faced a scary delivery. She gave birth to a baby girl after some difficult complications.

Some wild moments will be included in these flashback scenes, so don’t miss them! We’ll give you updates as other Days news comes in. Stay tuned to DOOL and don’t forget to check CDL often for the latest Days of Our Lives spoilers, updates and news.