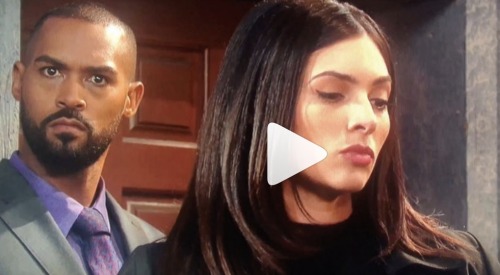 Days of Our Lives (DOOL) spoilers has some fun news to pass on about the DOOL cast and some humorous moments that Lamon Archey and his costars had behind the scenes on the show. Lamon, who portrays Eli Grant on the NBC soap, recently posted a blooper video that has us laughing, and we think you’ll get a kick out of it, too.

The video showed several cast members attempting to film a scene in which Eli, Rafe Hernandez (Galen Gering), and Lani Price (Sal Stowers) burst into the motel room where Evan Frears aka Christian Maddox (Brock Kelly) is staying. As DOOL viewers know, Evan has been hiding out there with little David Ridgeway (Caleb and Kyler Ends) and his dad Orpheus (George DelHoyo).

Well, in the scene, Rafe is supposed to enter the motel room flanked by Eli and Lani, and yell, “Freeze, Police!” With weapons drawn, it’s supposed to be a serious and intense moment, but all they find is Evan in the room alone, while Orpheus and David are gone. At least, that’s how the scene is supposed to go!

In the behind-the-scenes video that Lamon posted, the first take doesn’t go so well. Rafe bursts in, followed by Eli and Lani, and Rafe says, “Freeze. Police!” Then Rafe hesitates and Galen breaks character and says, “PoPo.” At that point, all of the actors crack up and have to re-take the scene.

But the second take doesn’t “take” either, as Lamon bursts into laughter, causing the rest of the cast to crack up. Then, as the actors continue with the scene, Galen flubs a line, causing Brock to laugh and get the giggles. From there, all the actors erupt in laughter, and someone behind the scenes tell them to all settle down.

Lamon posted the hilarious video, which you can watch below, on his Instagram feed along with the following caption: “Behind the scenes #Blooper. When the class clowns unite…#fireup #PoPo #SalemPD.”

Lamon’s video has garnered several thousand views so far, and his followers have responded well to the spectacle. One follower replied: “Just made my day. Great to have a laugh. Love you guys.” And another said: “That ‘PoPo’ was everything lol.”

At any rate, the video is great for a good laugh, and it’s nice to see the actors enjoying their time behind the scenes together. What do you think of Lamon’s blooper video? Stay tuned to Days of Our Lives and be sure to follow us at CDL for all your latest DOOL news. We’ll keep you informed as more updates and spoilers arise.

Note to all actors. 📝 ‪Even when you think you’re not on camera; act like you are. 😆LOL😆 #Blooper #Days “I thought the camera was over there”‬ #FlashBackFriday

Note to all actors. 📝 ‪Even when you think you’re not on camera; act like you are. 😆LOL😆 #Blooper #Days “I thought the camera was over there”‬ #FlashBackFriday