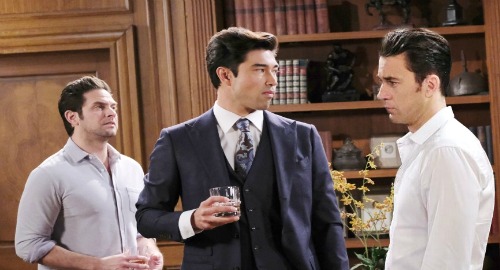 Days of Our Lives (DOOL) spoilers tease that Jake Lambert (Brandon Barash) will soon have a great opportunity fall into his lap. As viewers are aware, Jake is very interested in getting a piece of the DiMera pie, and he’d like to be more involved in DiMera Enterprises business.

Jake was integrally involved in the Collins deal a few months ago, when he sweet-talked an investor into doing business with the family company at Gabi DiMera’s (Camila Banus) request.

Or course, Chad DiMera (Billy Flynn) was horrified by Jake’s involvement in the Collins deal, and in the fact that Jake actually got invited to Kansas City to eat ribs with the investor.

Ever since, Chad has been vying to keep Jake out of DiMera Enterprises, but it seems that there’s only so much that Chad will be able to do to deny Jake his birthright.

Well, according to Days of Our Lives spoilers, Jake will receive a lucrative job opportunity during the week of November 16-20, and it’s kind of hard to imagine him getting an opportunity outside of DiMera.

During this same week, Li Shin (Remington Hoffman) will return to Salem, where he’ll have news to share with Chad and Jake. Perhaps Li is going to offer Jake a permanent position at DiMera Enterprises.

Li is an important member of the DiMera board, and if he tells Chad that the board very much wants Jake to be involved in the family company, then there’s probably not going to be much that Chad can do about the situation – what’s he going to do, tell Li and the board no?

Something tells us that Jake is going to be very happy after Li comes to Salem and shares his news. Perhaps Li will share that the board was very impressed with how Jake handled the investor for the Collins deal, and they’ll want to see more of what Jake has to offer the company.

Or maybe Li will suggest that Chad start mentoring Jake and showing him the ropes about DiMera business. That won’t go over well with Chad if that’s the case, especially since Chad not only resents Jake’s interference in his business but in his marriage to Abigail DiMera (Marci Miller) as well.

It would make for an interesting situation if the brothers DiMera have to work together every day at the office!

It should be interesting to see what happens from here, but something tells us that Jake’s going to be a very happy man after Li’s visit, while Chad is going to be pretty peeved!

Stay tuned to the NBC soap and we’ll keep you up to speed on all the latest Days of Our Lives spoilers, news, and daily episode recaps. Here at CDL, we’ve got you covered!