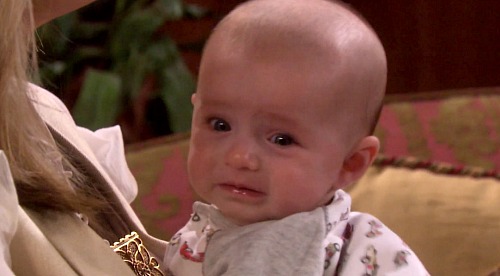 Days of Our Lives (DOOL) spoilers has some news to pass on about a couple adorable additions to the show. Allie Horton’s (Lindsay Arnold) baby boy Henry Horton is now being played by a set of twin girls, Jayna and Kinsley Fox.

The role of Henry was previously being played by Delaney and Parker Evans, and the change was recently announced by @Star_Kidz on Twitter.

We’ll probably be seeing a lot more of little Henry on screen, especially considering that he may very well be the subject of an important DNA test in upcoming episodes.

As Days of Our Lives viewers know, Allie has just alleged that she was raped on the night that Henry was conceived, and she’s under the belief that Tripp Dalton (Lucas Adams) is the guilty party.

Of course, there are probably some twists and turns coming in this storyline. It appears that Tripp will be under heavy suspicion at first, and that he will end up being grilled by the cops, while Allie struggles with her newfound memories about what happened to her on that terrible night.

But Tripp is going to insist that he never slept with Allie at all, and that means that it probably won’t be long before someone decides that a DNA test is in order to determine if Tripp is Henry’s biological father.

It looks like Kayla Brady (Mary Beth Evans) will likely be the one who suggests the DNA test, and that should ease Tripp’s mind, assuming that his story is legit.

Of course, if the DNA test results come back showing that Tripp isn’t the father, then Allie is going to have a couple of horrible realizations. First, she’ll be struck with the guilt of having accused an innocent person of a terrible crime.

And worse, she’ll have to face the fact that someone else was with her that night, and that someone she doesn’t even remember could get away with the rape.

There will certainly be some big drama surrounding Henry, so we’ll be seeing much more of Jayna and Kinsley Fox in the role. Jayna and Kinsley are a couple of cuties, and we look forward to seeing them in an ongoing fashion on Days of Our Lives!

Stay tuned to the NBC soap and don’t forget to keep CDL at the ready for all the latest Days of Our Lives spoilers, news, and daily episode recaps.