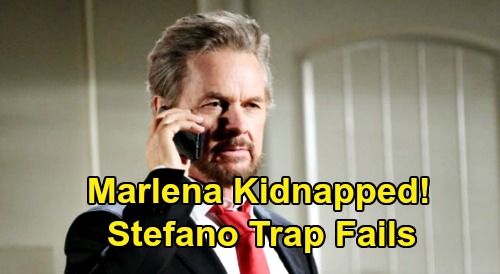 Days of Our Lives (DOOL) spoilers tease that John Black (Drake Hogestyn) and Justin Kiriakis (Wally Kurth) will put a plan in motion. Stefano DiMera aka Steve Johnson (Stephen Nichols) just isn’t going to rest until he has Marlena Evans (Deidre Hall). He feels like he’s on the verge of getting what he wants, but Justin and John will have other ideas.

DOOL fans can expect Marlena herself to be part of this plan, which is honestly a terrible idea. They’re just begging for trouble, but Marlena will be involved anyway.

Days of Our Lives spoilers say Justin and Marlena will meet with Stefano during the week of March 2-6. They’ll hope to move forward with negotiations and try to score Kayla Brady’s (Mary Beth Evans) release.

Although Stefano will want a hostage trade, Justin and Marlena will surely try to talk him out of that. Perhaps that’s why Marlena will be tied to all the drama. It’d be safer to keep Marlena as far away from this mess as possible, but she may think she’s the only one who can get through to Stefano.

Of course, the real goal may be to distract Stefano while John plots a sneak attack. After all, there must be a reason why John’s not part of these negotiations. It means John will be busy doing something else, and what could be more important than saving Kayla?

Taking Stefano down entirely would fit the bill. John may hope he can gain the upper hand and force Stefano into custody.

Whatever the case, Days of Our Lives spoilers, updates and news say this scheme will end in disaster. Marlena’s going to do what she does best and get kidnapped!

It sounds like John’s sneaky mission will be discovered, so Stefano may wind up with the advantage. He certainly doesn’t want to land behind bars and has no intention of walking away from his “Queen of the Night.”

Days spoilers say John will panic over Marlena’s abduction, but DOOL fans know he won’t sit back and do nothing. He’ll leap into hero mode once again, so expect some shocking moments as he searches for his love. When it comes to Marlena, John never lets anything stand in his way!

Some excellent Days action’s coming up, so don’t miss what’s in store. As other news emerges, you can check back here at CDL for all the shockers and shakeups. We’ll deliver the latest Days of Our Lives spoilers and updates, so stop by frequently!