Days of Our Lives Spoilers: Marlena Saves Victor From Raging Sarah – Grieving Mother Out Of Control 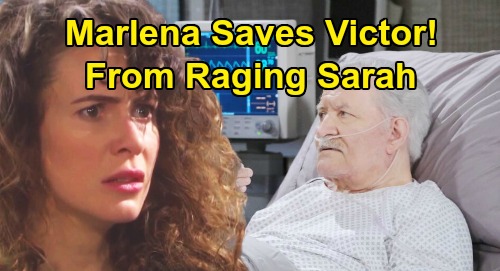 Days of Our Lives (DOOL) spoilers tease that Sarah Horton (Linsey Godfrey) has had a tough time bouncing back from losing her daughter. As DOOL viewers know, Sarah tearfully handed over Rachel Black to Kristen DiMera (Stacy Haiduk) in Paris after Kristen tracked Sarah down at a train station as she was about to flee with Rachel. Sarah then had to return to Salem without the little girl she had raised as her own from birth.

Well, Sarah has tried to face the separation from little Rachel, and she’s mainly put her energy into exacting revenge onto Xander Kiriakis (Paul Telfer). As DOOL viewers know, Sarah and Brady Black (Eric Martsolf) are pretending to be a hot-and-heavy item in order to hurt Xander and make him pay for his part in the baby swap that had such a profound effect on their lives.

So far, Sarah has had the opportunity to rage against Xander quite a bit for what he did to her. And Days of Our Lives spoilers say that Sarah will soon get her chance to confront the other person who was responsible for the baby swap – Victor Kiriakis (John Aniston).

Sarah will pay Victor a visit at the hospital and she’ll go off on Victor, giving him a piece of her mind about what he did.

Of course, Victor is pretty much a captive audience right now since he’s laid up in the hospital and can’t really flee from his victims’ outpourings of rage. Victor has already gotten an earful from Brady and from John Black (Drake Hogestyn) about how he ruined Brady’s life. Well, now it will be Sarah’s turn to give Victor a piece of her mind.

And that should be a big scene, since Sarah gets pretty emotional. And, let’s face it, Sarah has a right to be outraged, since Victor’s actions led her to fall in love with a baby who wasn’t hers. And now Sarah is dealing with the separation from “her” baby, so she’s pretty distraught.

Well, it seems that Sarah will let Victor have it for what he did, and according to DOOL spoilers, she’ll also blast Victor for being a terrible husband to Maggie Kiriakis (Suzanne Rogers).

It will be Sarah’s moment to unleash and give Victor a total verbal lashing for what he’s done. Sarah will be in the middle of her rage fest against Victor when Marlena Evans (Deidre Hall) comes along and pulls Sarah out of the room.

Marlena will give Sarah some much-needed advice – that she needs to let go of her anger before it consumes her. Sarah and Marlena will then get into it as Marlena suggests that Sarah could still be in love with Xander. That will put Sarah off, but will she ultimately listen to Marlena about letting go of her anger?

We’ll see what happens here, but Sarah is going to need to get a grip on her anger before it leads her to do things that she might regret. Right now, she and Brady are playing a dangerous game with Xander, leading him to believe that they’re sleeping together.

Who knows how Xander is going to ultimately react to that and what he’ll do in response. But the more Sarah pushes him, the more dangerous things could get.

At any rate, it seems that Sarah needs to find a healthier way of coping than deceiving and raging at people. Do you think that Sarah will get a grip on her emotions soon? Stay tuned to Days of Our Lives and don’t forget to check CDL often for the latest DOOL spoilers, daily recaps, and news.