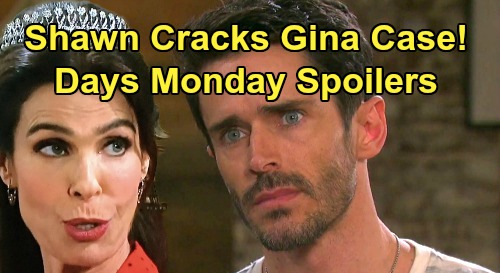 Days of Our Lives (DOOL) spoilers for Monday, January 27, tease that a big comeback is on the way. Shawn Brady (Brandon Beemer) will arrive in town after being summoned by Rafe Hernandez (Galen Gering). Rafe will think it’s high time they had a chat about Shawn’s mom and her bizarre behavior.

“Hope Brady” aka Princess Gina Von Amberg (Kristian Alfonso) has been doing some strange things lately, so Rafe will give Shawn updates. He’ll run down the list of stuff he found suspicious – like “Hope’s” smoking and her newfound interest in John Black (Drake Hogestyn).

Rafe will also talk about how weird “Hope’s” been on the job. He just won’t think any of it adds up, so he’ll rely on Shawn to help him out. Days spoilers say Shawn will catch on almost immediately. He’ll remember Princess Gina’s previous mischief and realize this must be her, not Hope.

DOOL fans can expect Rafe and Shawn to put their heads together. The wheels will start turning about Dr. Wilhelm Rolf (William Utay) and what he’s capable of. Shawn will suggest Dr. Rolf must’ve done something to transform Hope into Princess Gina.

Days of Our Lives spoilers say Rafe will be eager to corner Princess Gina, but Shawn won’t think that’s smart. He’ll point out that Princess Gina tried to murder him once upon a time. Shawn will feel like they have to be careful since Princess Gina’s so dangerous.

Over with Kristen DiMera (Stacy Haiduk), she’ll spend some time bonding with Brady Black (Eric Martsolf). They’ll reflect on the loss of their baby girl and how much they wanted to raise her. Of course, Kristen will still have to deal with Nicole Walker (Arianne Zucker) and her fake relationship with Brady.

Days of Our Lives spoilers say Kristen will grow increasingly irritated by Nicole’s interference. At some point on Monday, Kristen will tell Eric Brady (Greg Vaughan) that Brady and Nicole have reunited. Since Kristen doesn’t know this romance is a ruse, she’ll be giving Eric some bogus information. Nevertheless, Eric will be heartbroken over what he views a deep betrayal.

Next, Evan Frears (Brock Kelly) and Sonny Kiriakis (Freddie Smith) will keep building on the connection they’ve formed. They’ll get closer, which isn’t great news since Will Horton (Chandler Massey) is innocent. Will didn’t kill Adrienne Kiriakis (Judi Evans), so there’s no reason he can’t be with Sonny – at least that’s how Ciara Brady (Victoria Konefal) will see it.

Ciara will reiterate that everyone needs to know the truth, but Will won’t be so sure. He’ll worry about how Maggie Kiriakis (Suzanne Rogers) would take it, so this will turn into quite a debate with Ciara. It sounds like Will and Ciara have some work to do if they expect to get on the same page.

Another exciting episode’s coming up, so don’t miss all the action. We’ll keep you posted as other Days details emerge. Stick with DOOL and don’t forget to check CDL often for the latest Days of Our Lives spoilers, updates and news.