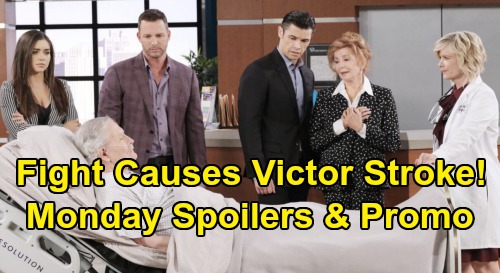 Days of Our Lives (DOOL) spoilers for Monday, January 6, tease that Kayla Brady (Mary Beth Evans) will urge “Steve Johnson” aka Stefano DiMera (Stephen Nichols) to admit more. “Steve” was aloof throughout most of their confrontation, but Kayla just wouldn’t let it go. She finally pushed “Steve” until he snapped that he was in love with another woman.

Kayla looked devastated since she’s spent decades being “Steve’s” true love. The idea that “Steve” loves someone else clearly hit her hard, but that won’t stop her from seeking answers. Days of Our Lives spoilers say Kayla will try to figure out who “Steve’s” new girlfriend is. She’ll assume he’s got some lovely lady waiting on him, but this story is far more complicated than that.

Stefano is obsessed with Marlena Evans (Deidre Hall) and intends to start courting her ASAP. Of course, he’ll have to subtly do it as “Steve” for now – and that’s bound to raise more red flags.

Meanwhile, Days of Our Lives spoilers say Xander Kiriakis (Paul Telfer) will deliver a fierce threat. He’ll insist that Ben Weston (Robert Scott Wilson) needs to get a grip on Ciara Brady (Victoria Konefal) or else.

Xander’s hoping Ben’s final appeal doesn’t pan out, but he’ll want to be sure they’re clear on things if it does. However, Days spoilers say Ben won’t appreciate Xander’s warning. Ciara is what matters most to Ben in this world, so he’ll definitely be protective of her in Monday’s DOOL episode.

At the Kiriakis mansion, Ciara will spar with Victor Kiriakis (John Aniston). He just confronted Ciara about her deception, but she’ll argue that Victor’s been deceiving her, too.

As their shouting match heats up, Victor will suddenly collapse. He’ll suffer a stroke and leave Ciara reeling, so she’ll have to call for help and get the paramedics over there ASAP.

Over with Evan Frears (Brock Kelly) and Sonny Kiriakis (Freddie Smith), they’ll come together for a kiss. Evan recently planted one on Sonny, but it should be completely mutual this time. Sonny will need to take things slow, but he’ll feel like he has to start moving on from Will Horton (Chandler Massey).

Will and Sonny will inevitably reunite sooner or later, but it’ll be a long journey back to each other. As for Evan, he just might have some big secrets that’ll be revealed down the road. We’ll give you updates as other Days news comes in. Stay tuned to DOOL and don’t forget to check CDL often for the latest Days of Our Lives spoilers, updates and news.

Lives hang in the balance as Victor collapses and Ben waits to hear if he’ll be given the death penalty. Watch #DAYS, weekdays on @NBC. pic.twitter.com/JSPgjfrgSg