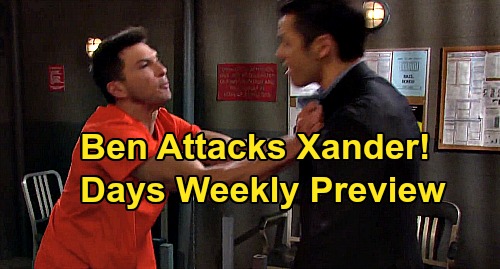 Days of Our Lives (DOOL) spoilers tease that we’re in for a week of action on the NBC soap. The new DOOL promo for the week of January 6 promises some angry confrontations, a serious health crisis, and some big threats, so let’s get right into it. First off, Ciara Brady (Victoria Konefal) will have some seriously terrifying moments when her confrontation with her grandfather Victor Kiriakis (John Aniston) goes very wrong.

As DOOL viewers know, Victor has just confronted Ciara about visiting with Ben Weston (Robert Scott Wilson) again at the prison. It looks like they’re about to have it out, but it’s all going to get pretty scary when Victor goes into crisis.

According to Days of Our Lives spoilers, Victor will suffer a stroke as he’s arguing with Ciara, and the promo shows Ciara trying to rouse an unconscious Victor in his chair. From there, Victor will be rushed to University Hospital while Ciara and others wait and wonder what’s wrong.

Ciara will soon face an angry Xander Kiriakis (Paul Telfer), who’s shown in the promo snarling that “if he dies it will be on your head.” Something tells us that Xander means it, too – after all, he’s become pretty attached to his Uncle Vic.

He’ll probably be feeling frustrated that he didn’t act sooner to neutralize Ciara, and he’ll lash out in anger.

Next, the new DOOL promo addresses the hurt and confusion that Stefano DiMera aka Steve Johnson (Stephen Nichols) is causing for those who knew and loved Steve.

“Stevano” recently told a bewildered Kayla Brady (Mary Beth Evans) that he didn’t come back to Salem for her, and that he was in love with another woman, which absolutely floored her. She’s shown in the promo getting comfort from Justin Kiriakis (Wally Kurth) and trying to process what’s going on.

Viewers will also see Jack Deveraux (Matthew Ashford) angrily confronting the man who he believes is his brother. In the promo, Stevano yells as Jack in a very Stefano-like way that “Kayla has moved on,” while an outraged Jack screams back about him hurting Kayla.

Of course, there’s more for the brothers to discuss here, since Jack will also be upset that “Steve” didn’t come home for their sister Adrienne Kiriakis’ (Judi Evans) funeral.

Of course, since this is Stefano we’re talking about, he’s not going to take well to being railed against like this, but he’ll have to play the role of Steve dutifully if he wants to continue staying with John Black (Drake Hogestyn) and Marlena Evans (Deidre Hall), which is his end game. All Stefano really wants is to be close to his “queen of the night.”

Finally, the new Days preview deals with a couple of harrowing situations for Ben. First, it doesn’t look like his visit at the prison with Xander is going to go well, as Ben is shown throwing aside a table in anger and getting up in Xander’s face about something.

This will likely have to do with Ciara, since Xander told Ben at the end of Friday’s episode that he wanted to chat about his nosey girlfriend.

Perhaps Xander will threaten to harm Ciara unless Ben ensures that Ciara stops looking into his involvement into sending an innocent man to prison. Of course, Ben and Ciara think that Xander killed Ben’s sister Jordan Ridgeway (Chrishell Stause) on Victor’s orders, then framed Ben for it.

But Days spoilers say that this isn’t the case, and that the innocent man that Xander and Victor framed was actually Will Horton (Chandler Massey).

At any rate, it looks like Xander will make some sort of threat and will run his mouth enough to send Ben into a fury. And then, Ben’s week will get even more stressful as his final appeal looms.

The new promo shows Justin at the appeal hearing presumably telling the board that his client does not deserve the death penalty, then later he’ll tell Ben that the decision just came in. Will Ben’s appeal be denied?