BY hellodrdavis on November 10, 2019 | Comments: one comment
Related : Days of Our Lives, Soap Opera, Spoiler, Television 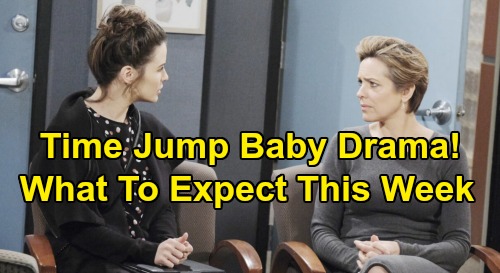 Days of Our Lives (DOOL) spoilers tease that viewers are in for some interesting developments when the show picks back up on Monday, November 11 – not least of which is the fact that Stefano DiMera is being shown as being very much alive. As you’re probably now aware, the much-anticipated DOOL time jump occurred on Friday, November 8, when Jack Deveraux (Matthew Ashford) informed Jennifer Deveraux (Melissa Reeves) that she has just awakened from a year-long coma. That came as a shock to Jen, and it means some big changes for viewers.

So, what can viewers expect when the action picks back up during the week of November 11? Well, there’s a lot in store, so we’ve put several of developments together for you here in one place. Since a whole year will have gone by in a virtually an instant for viewers, there will be some big changes that have taken place in Salem. The following is by no means a comprehensive list of what’s going to happen, but it should give you a good idea of some of the post-time jump state of affairs in Salem.

Nicole & Eric Are Still Together

Days viewers will remember that one of the last things they saw before the time jump was Nicole Walker (Arianne Zucker) telling Eric Brady (Greg Vaughan) that Sarah Horton (Linsey Godfrey) is pregnant. Sarah was trying to deflect Eric’s direct questions, and Nicole just blurted out that Sarah is pregnant. Of course, this came right after Nicole assured Sarah that she’d keep the secret about her pregnancy.

Nicole was deeply concerned that Eric might leave her for Sarah once he found out about Sarah’s baby, but it certainly doesn’t look like that will be the case, since DOOL spoilers indicate that Nicole and Eric will still be together after things resume on the show after the time jump. So it seems that Nicole’s fears of Eric leaving her never came to fruition.

Days of Our Lives spoilers are clear that Princess Gina (Kristian Alfonso) will still be on the scene after the time jump, and that she’ll be more determined than ever to get together with John Black (Drake Hogestyn). Further, she’ll be particularly annoyed with the presence of Marlena Evans (Deidre Hall) in John’s life. Could Marlena be in danger going forward? We certainly know that Princess Gina is deadly when she gets determined, since she’s the one who pushed Jen off the balcony prior to her coma.

But the continued presence of Princess Gina in Salem raises some interesting questions. Has she been around and posing as Hope Brady (Kristian Alfonso) for the whole time jump year? If so, how has she managed to pull that off without being detected? Before the time jump, she was pretty determined to finish Jen off by smothering her with a pillow, so what caused her to let Jen lay in a coma for a year? These questions should be answered in good time.

Eli and Gabi Are A Couple

As DOOL viewers will remember, Lani Price (Sal Stowers) broke Eli Grant’s (Lamon Archey) heart at their wedding when she dumped him at the altar. Of course, this was all because of Gabi DiMera’s (Camila Banus) devious plan. Gabi had sabotaged the pacemaker regulating Julie Williams’ (Susan Seaforth Hayes) heart and threatened to kill Julie if Lani didn’t comply with her demands.

Well, it doesn’t look like Eli and Lani will have later worked things out at all, since Days of Our Lives spoilers spoilers indicate that Eli and Gabi will be a couple once again. Now, does that mean that Gabi still has control over Julie’s pacemaker? DOOL viewers will find out in time, but it’s certainly looking like Gabi swooped right in and got together with Eli as part of her plan to cause Lani maximum pain.

According to DOOL spoilers, Gabi will confess to Eli that she thinks Chad DiMera (Billy Flynn) is plotting against her, and it looks like this could be about DiMera Enterprises. Might Gabi have stayed on at DiMera in a pivotal role? Last viewers heard before the time jump, Tony DiMera (Thaao Penghlis) was named DiMera’s CEO and was in charge of the enterprise.

But it’s also the case that Chad and Abigail DiMera (Kate Mansi) will have returned to Salem after the time jump, and given the spoiler about Gabi’s concerns, it seems that the struggle for the top spot at DiMera will still be raging on, or at least it will be renewed after perhaps a period of stability.

DOOL spoilers also indicate that Mr. Shin’s (Michael Hagiwara) son Li Shin (Remington Hoffman) will show up in Salem. Fans of the DOOL App series “Chad and Abigail In Paris” will remember Li from that show, and he’ll be making his crossover to DOOL. Might he get involved in the action and have his sights set on taking over DiMera as well?

The problem for everyone involved in the DiMera power struggle is that the new Days 2019 promo shows that Stefano DiMera is alive and well! Needless to say The Phoenix will have a major influence on what transpires after the Time Jump. The issue of whether Stefano has been recast and will play an active on-screen role in what’s to come remains a matter of speculation.

At any rate, that gives you a good idea of where some of the main storylines are headed when things pick up on DOOL after the time jump. What changes are you looking forward to? Stay tuned to DOOL and don’t forget to check CDL often for the latest Days of Our Lives spoilers, updates, and news.