Days of Our Lives Spoilers: Claire’s Out of Control – Crazy Backstabber Strikes Again with Another Disturbing Move 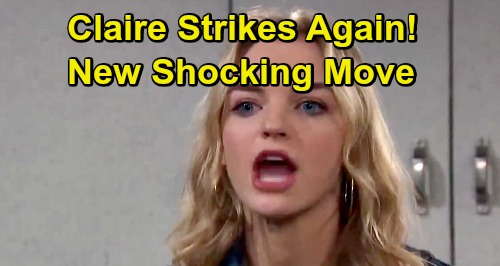 Days of Our Lives (DOOL) spoilers tease that Tripp Dalton (Lucas Adams) will want to be there for Haley Chen (Thia Megia). He’ll hate that she was betrayed by JJ Deveraux (Casey Moss), who told Jack Deveraux (Matthew Ashford) about Haley’s undocumented immigrant status. Of course, that turned into a total disaster after Jack blew up the mayoral debate.

Haley will crash at the loft for a while and hope she can figure something out. She’ll do everything she can to avoid being deported, but her plan to hide will hit a snag. Days of Our Lives spoilers say Claire Brady’s (Olivia Rose Keegan) jealousy will grow, so that’s sure to spell trouble.

Claire wasn’t happy the last time Tripp interacted with Haley, especially since he’d already admitted she was attractive. She certainly won’t like it when Tripp’s comforting Haley and taking pity on her. Claire likes to be the center of attention when it comes to the men in her life – or anything in life really. She can’t handle it if the focus isn’t on her, so another betrayal is coming up.

Days spoilers state that Claire will stab Haley and Tripp in the back. That likely means she’ll rat Haley out for hiding at the loft. Her main goal should be getting Haley out of there and away from Tripp. Claire probably wouldn’t mind if Haley was deported. She could eliminate the competition for Tripp’s heart and have him all to herself.

This is just the latest is a string of troubling incidents for Claire. At the hospital earlier this week, Claire had a long fantasy. She daydreamed she was explaining how and why she started the cabin fire, which led to Tripp and Ciara Brady’s (Victoria Konefal) outrage.

Once Claire snapped out of it, she realized she couldn’t possibly come clean. She’ll continue to keep that secret and potentially pile on more. After all, it’s tough to believe Claire will just blatantly betray Haley. She may try to be sneaky about it, but Tripp could figure it out. He may determine that Claire’s the only other person who knew Haley’s location and argue it had to be her.

Claire would undoubtedly deny it, but would Tripp believe her? She doesn’t have a great track record, so there are plenty of strikes against her. There’s a good chance there’ll be plenty more in the months ahead. Olivia Rose Keegan is exiting DOOL, so we’re starting the march toward her shocking departure.

On Twitter, Keegan recently replied to a fan who praised her work so far and hoped for more excitement. “It is indeed a wild ride and I hope you enjoy it as much as I enjoyed filming it,” Keegan said. Days of Our Lives spoilers say Claire’s going to spiral out of control, so some hot drama’s in store!

Are you looking forward to the next phase of this storyline? We’ll give you updates as other Days news comes in. Stay tuned to DOOL and don’t forget to check CDL often for the latest Days of Our Lives spoilers, updates and news.

In the latest #DAYS, Ciara learns the truth about who set the fire that almost killed her. Now she wants to know why. Watch Days of our Lives, weekdays on NBC. https://t.co/ZsCmioRrzb pic.twitter.com/BmWMBd78YD