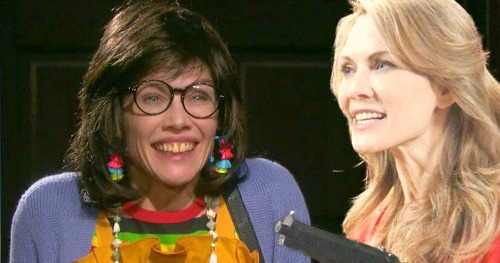 Days of Our Lives (DOOL) spoilers tease that a special guest will want to attend the “Jarlena” anniversary celebration. Susan Banks (Stacy Haiduk) will want to show her support for Marlena Evans (Deidre Hall) at the big event. Of course, that could bring some risks for Kristen DiMera (Stacy Haiduk) – and risks certainly aren’t what Kristen’s looking for right now.

Kristen got caught in her Susan getup after the real Susan showed up in town. She was able to smooth things over by insisting she was Sister Mary Moira Banks (Stacy Haiduk), but she told some lies that could come back to bite her. Days of Our Lives spoilers say Kristen will worry once Susan appears again. She’ll sense that Susan could be a major problem if she doesn’t act fast.

There may even be another incident that raises suspicions for Susan. DOOL fans can expect “Nicole DiMera” (Stacy Haiduk) to make a shocking decision. She’ll determine that Susan must be eliminated. “Nicole” just won’t see any other way to keep her scheme in play, so trouble’s brewing.

Susan might stumble across “Nicole” adjusting her mask or overhear something she shouldn’t. After all, Susan has a knack for finding herself in the wrong place at the wrong time. She also tends to pop up exactly where she isn’t wanted! Susan may be on the verge of exposing “Nicole” as Kristen soon enough.

During the week of August 19-23, “Nicole” will reach her deadly Susan decision. Days of Our Lives spoilers say “Nicole” will have a chance to make some bold moves, but her plans will take a wrong turn. One problem is that while Kristen focuses on Susan, more suspicions will be swirling all over town.

Gabi DiMera (Camila Banus) will figure out Kristen’s evil plot. Will Horton (Chandler Massey) will also start spreading the word that Kristen may be alive. Even Marlena herself will suspect something incredibly weird is going on with “Nicole” – even more weird than usual. The walls will be closing in, even if Kristen doesn’t realize it. She may be too distracted by Susan to notice!

Days spoilers say “Nicole’s” Susan murder plot probably won’t pan out. However, Marlena and John Black’s (Drake Hogestyn) anniversary party will indeed bring a dramatic big reveal. Kristen will end up pulling a gun on Marlena, so that should be the one she intended to use on Susan.

Kristen’s stunning exposure will lead to extreme danger, so don’t miss all the action! We’ll give you updates as other Days news comes in. Stay tuned to DOOL and don’t forget to check CDL often for the latest Days of Our Lives spoilers, updates and news.