Days of Our Lives Spoilers Next 2 Weeks: Brady Makes Divorce Deal with Xander – Sarah Back With Eric – Election Results Shocker 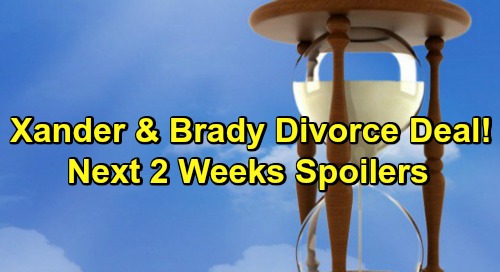 Days of Our Lives (DOOL) spoilers for the next two weeks tease that Holly Jonas’ (Harlow and Scarlett Mallory) presumed death will cause chaos. During the week of May 6-10, Rafe Hernandez (Galen Gering) will disregard Hope Hernandez’s (Kristian Alfonso) instructions and pay the price for it. The van that’s assumed to be carrying Holly will fly off a cliff thanks to Rafe’s blunder.

Rafe will plan to check for survivors with Ted Laurent (Gilles Marini), but the van will explode before they have a chance. Nicole Walker (Arianne Zucker) will look on in horror as she realizes her little girl has been killed in the accident. She’ll be comforted by Eric Brady (Greg Vaughan) on site, but rage will erupt when they get home. Nicole will lash out at Eric for not protecting Holly like he promised.

Back with Rafe, he’ll face Hope’s wrath as well. Days of Our Lives spoilers say all their issues will come out during this heated argument. By the time they’re finished, Hope and Rafe will both be fed up. DOOL fans will see Rafe take off his wedding ring and fling it off the cliff where the van slipped off. He’ll feel like his marriage is over for good.

Over with Maggie Kiriakis (Suzanne Rogers), she’ll be crushed by the news Holly didn’t survive. Maggie will nearly be driven back to the bottle, but Nicole will stop her from destroying her sobriety. They’ll get her away from the vodka at Doug’s place, so she’ll resist temptation for now.

Thankfully, a very much alive Holly will simply be stashed somewhere for safekeeping. Xander Cook (Paul Telfer) told Ted he had no intention of giving Holly back, so her presumed death will fit perfectly with his plan. No one will be looking for Holly since they’ll believe she’s deceased.

During the week of May 13-17, Brady Black (Eric Martsolf) will make a deal with Xander. He’ll agree to give Xander what he wants in exchange for granting Nicole a divorce. Speaking of divorces, Hope will get in touch with Belle Brady (Martha Madison) and most likely ask for legal advice. Later, Rafe will receive divorce papers and be forced to accept that the end of “Rope” has come.

Other Days spoilers say Lani Price (Sal Stowers) will tell a lie for David’s sake. She’ll be determined to keep Ben Weston (Robert Scott Wilson) away from the kid, so she’ll tell Ciara Brady (Victoria Konefal) this fib and hope for the best. Next, Dr. Sarah Horton (Linsey Godfrey) will console Eric as Nicole continues to reject him. Perhaps Sarah will feel a glimmer of hope for her own future with Eric.

Meanwhile, Days of Our Lives spoilers state that the election results will come in. The outcome will bring some shockers, including the revelation of a major secret. Finally, Hope will lose her job as the police commissioner. The Holly debacle will be too much for her career to overcome, so Hope will be fired for Rafe’s irresponsible actions.

Some great episodes are ahead on the NBC soap. We’ll give you updates as other Days details emerge. Stay tuned to DOOL and don’t forget to check CDL often for the latest Days of Our Lives spoilers, updates and news.