Days of Our Lives Spoilers: Monday, June 22 Recap – Jake Gets Book & Girlfriend Back – Ciara Asks Claire To Be Maid of Honor 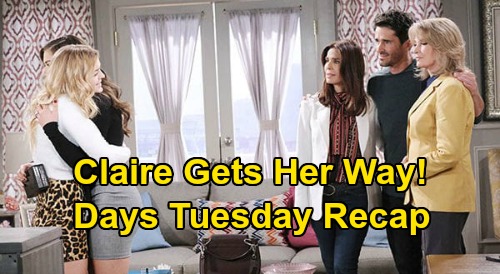 Days of Our Lives (DOOL) spoilers recap for Monday, June 22, reveal that Jake Lambert (Brandon Barash) and Gwen (Emily O’Brien) kissed passionately and were about to go upstairs to Jake’s apartment when Ben Weston (Robert Scott Wilson) walked in ready to work. “Am I interrupting something?” Ben said.

Gwen quickly buttoned up her shirt and met Ben, then Ben immediately asked where the book was. Gwen said she didn’t have it with her, and Ben got indignant, saying that the book was a matter of life and death and that she needed to return it right now.

Meanwhile, at the townhouse, Claire Brady (Olivia Rose Keegan) gazed at Ben and Ciara Brady’s (Victoria Konefal) “save the date” card. Out in the main room, Hope Brady (Kristian Alfonso) arrived and was greeted by Marlena Evans (Deidre Hall). Hope had come to check on Claire, and she asked Marlena how Claire was doing.

Hope admitted that she had concerns about Claire but that she was trying to keep an open mind. Hope specifically wondered whether Claire had expressed any jealousy over Ciara and Ben’s wedding.

Claire walked in the room and greeted Hope. Claire and Hope hugged, but Claire was unsure about whether Hope was really glad to see her.

Hope said that of course she was happy that Claire was home, and that she loved her very much. Soon, there was a knock at the door, and it was Gwen, who had returned to get the book for Jake.

Claire was upset that Gwen hadn’t returned the book yet, saying that Ciara and Ben could be in danger if the book wasn’t returned, and that’s the last thing she’d want.

Back at Jake’s garage, Ben and Jake talked about Gwen, and Jake said that his relationship with Gwen had been a rollercoaster relationship from hell. Soon, Gwen walked in with the book in hand.

Jake tried to strong-arm the book away from her, but Gwen demanded an apology first. After some back-and-forth, Jake apologized and got the book in his possession. Gwen then said she wanted to get back together and left. “I told you she was crazy!” Jake told Ben.

At the DiMera mansion, Chad DiMera (Billy Flynn) told Gabi DiMera (Camila Banus) that he was going to watch the DA rip her to shreds today, and that he was being called as a witness to put the final nail in her coffin.

Gabi and Chad bantered back-and-forth for a while, rehashing their history and Gabi’s history with Abigail DiMera (Kate Mansi).

Ultimately, Chad issued something that sounded like a threat, and Jack Deveraux (Matthew Ashford) walked in wondering what was going on. Gabi said that Chad was threatening her and left, then Jack told Chad that he really knew how to make an entrance.

Chad and Jack then talked about Abigail, whom Chad said was having a difficult time in treatment in Florida.

Chad said that Abigail was a fighter, and that she’d have good days, but then she’d have bad days, too, and that the drug she was given changed the chemistry of her brain. Chad also noted that the doctors weren’t sure that they’d be able to reverse the damage, and that “the Abigail we know and love may never come back to us.”

Jack urged Chad to keep the faith and to stay with Abigail in Florida, but Chad said that Abigail wanted Chad back home with the kids. Jack told Chad that he was his son, and Chad said that Jack was like a father to him. Chad then cut their talk short by having to rush off to Gabi’s trial, while Jack looked concerned.

At Statesville, Wilhelm Rolf (William Utay) got a visit from Rafe Hernandez (Galen Gering). Rafe wanted Rolf to admit to what he did to Gabi, and Rolf was flippant.

Rafe did his best to get Rolf to admit setting up Gabi, but he wouldn’t do it, even when Rafe said that he could get Rolf transferred to another facility where he could conduct his research. What Rafe really wanted to know was who actually drugged Abigail, and he told Rolf that all he needed to do was fork over a name.

At the Salem PD, Gabi met up with Rafe, who informed her that Rolf admitted setting her up. That made Gabi happy, but then Rafe said that it’s not enough to help her in her trial.

Rafe said that Rolf wouldn’t give him the name of the person who really drugged Abigail. Gabi was heartbroken and told Rafe she was scared as they hugged. Then it was time to get to court, so Rafe and Gabi left together.

Back at Statesville, Rolf talked with someone on a pay phone. “Hello, it is Dr. Rolf,” he said. “Rafe Hernandez paid me a visit and made me a tempting offer, but I turned him down and refused to implicate you in what happened to Abigail.” Rolf then hung up the phone and laughed sinisterly.

At the Salem Inn, Shawn Brady (Brandon Beemer) arrived to see Ciara. Shawn wanted to know if Ciara was ok after seeing Claire. Ciara and Shawn had a heart-to-heart about Claire, and Ciara shared that Claire wanted to be her maid of honor.

Shawn listened and understood Ciara’s hesitation, and he vowed to support Ciara in whatever decision she made.

Shawn wondered if there was someone else that Ciara could ask to be her maid of honor, but Ciara said that there really wasn’t. Ciara said that she was thinking about the whole thing, and that she wondered what kind of person she’d be if she could get past what Ben did but not what Claire did.

Ciara and Shawn then went over to the townhouse, where Claire, Marlena, and Hope were still talking. Ciara said she was glad everyone was there because she had something to say.

There’s definitely a lot going on right now on Days of Our Lives, so stay tuned! Stick with the NBC soap and don’t forget to keep CDL bookmarked so you don’t miss any of our Days of Our Lives daily recaps, spoilers, or news.