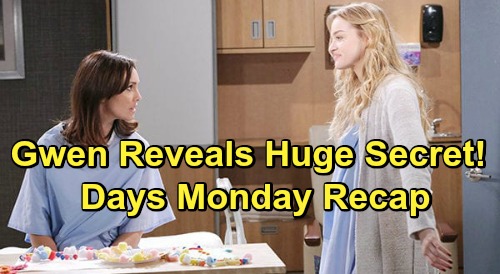 At Jake Lambert’s (Brandon Barash) garage, Jake left Gwen (Emily O’Brien) a voice mail message, and suddenly Will and Sonny burst in the place, demanding to know where Gabi was.

“WilSon” then threatened to call the police, but Jake cried out, “No, don’t!” That made Will and Sonny even more suspicious, and Jake tried to cover by saying that Gabi was out on bail and since she broke in and obviously took his toothbrush, she could get in trouble. Will and Sonny insisted on taking a look around the place.

At the Salem Inn, Ben Weston (Robert Scott Wilson) talked with Ciara Brady (Victoria Konefal), who was upset that they had no good leads on Gwen’s whereabouts. Ciara wanted to call the police, but Ben urged her not to, saying that it wasn’t a good idea. Ben insisted that Ciara go to work, as he needed to do the same.

At Bayview, Claire Brady (Olivia Rose Keegan) gushed to Gwen that her grandmother was going to get her out, maybe even as soon as today. Claire asked Gwen to keep quiet about Ciara’s wedding, and Claire explained that Marlena Evans (Deidre Hall) didn’t know that Claire knew about Ciara and Ben’s upcoming nuptials.

Gwen teased Claire a bit, and after some back and forth, Gwen admitted her own secret.

Gwen proceeded to explain that she faked a breakdown to get herself committed so she could hide out from her ex-boyfriend. Gwen said that her ex called and texted her, and that she had something that belonged to him…his “stuff.”

Ultimately, Claire and Gwen pinky swore to keep each other’s secrets no matter what. Gwen left, and Claire gazed at Ben and Ciara’s “save the date” card.

Belle explained that she and Shawn Brady (Brandon Beemer) arrived to make the decision about Claire’s release in person. Belle said that Shawn was a bit more cautious about it, since Ciara would be affected.

Belle asked if Claire knew that Ciara was getting married, and John and Marlena said that they hadn’t told Claire yet. Belle, Marlena, and John had a long talk about whether Claire was ready to be released, and they discussed the pros and cons of her being released and of her staying in Bayview.

Belle got a bit upset and questioned whether Marlena really thought Claire was ready.

In town square, Hope Brady (Kristian Alfonso) and Shawn hugged and were happy to reunite. Shawn shared with his mother the reason for his visit to Salem, and Hope got serious, clearly worried about the impact of Claire’s possible release on Ciara.

Hope said that she loved her granddaughter and wanted her to come home, but she wondered if Claire was ready. Shawn said it was up to the doctors, and that Marlena was consulting as well.

Shawn deflected, then got a text and had to go. Hope explained the Claire situation to Ciara off-screen, and Ciara got thoughtful and a little anxious.

Hope said that protecting Ciara was her priority, and while Ciara seemed taken aback by the whole thing, she said that she wanted to give Claire the same benefit of the doubt that she gave Ben about his mental health recovery.

Ben wasn’t so sure that was a good idea – after all, Bayview let Jordan Ridgeway (Chrishell Stause) out of Bayview before she was ready. But Ciara insisted that she needed to support Claire.

Ciara said that she missed Claire, and that things may never get back to where they used to be, but that she wants what’s best for Claire. Ben accepted it, although he remained worried about the whole thing.

Hope thought there might be something else on Ciara’s mind, but Ciara covered and said she was having trouble with Brady Black (Eric Martsolf) at Titan.

Ben took off for work and Hope still thought that Ciara was hiding something from her. Ciara covered, saying that she was just tired from working too much. Ciara and Hope hugged and revisited the Claire issue. Ciara said that when Claire gets released, she’ll go back to Hong Kong.

Back at the penthouse, Shawn arrived to see John, Marlena, and Belle. Belle asked Marlena what she’d recommend if Claire was just a regular patient. Marlena said she’d recommend proper support and a supervised release on a trial basis.

Everyone was thrilled, and Shawn and Belle decided to head to Bayview to see Claire. Once alone, John told Marlena that he trusted her instincts all the way.

Back at Jake’s garage, Ben showed up for work and was surprised to see Will and Sonny there. Ben greeted “WilSon” heartily, then wondered what they were doing there.

Will said that Gabi was missing and that they knew she was at the garage yesterday. “Do you know anything about it?” Will asked Ben. Jake eyeballed Ben, shaking his head slightly.

And back at Bayview, Shawn and Belle arrived to surprise Claire. Claire was thrilled to see her parents, and she was even more thrilled to hear that she was going to be released.

Claire was nearly in tears, saying that she’d been hoping and praying for this. But then her parents said that Claire would be on a plane to Hong Kong tomorrow, and Claire immediately changed her demeanor. “There’s no way I’m going back to Hong Kong with you!” Claire exclaimed.

That was a great episode of Days of Our Lives, and there’s plenty more coming this week, so stay tuned! Stick with the NBC soap and don’t forget to check CDL frequently for the latest Days of Our Lives spoilers, news, and recaps.