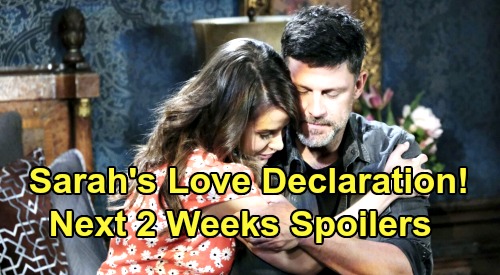 Days of Our Lives (DOOL) spoilers for the next two weeks tease that several Salemites will land in tricky situations. During the week of January 27-31, Princess Gina Von Amberg aka “Hope Brady” (Kristian Alfonso) will fear the worst once Shawn Brady (Brandon Beemer) arrives in town. She’ll know Shawn is the one person who could solve the “Hope” mystery and blow her plot.

It won’t be long until Rafe and Shawn realize Marlena Evans (Deidre Hall) has gone missing. They’ll worry Marlena’s in danger, so they’ll have to figure out how to handle this. Meanwhile, “Hope” will pull a gun on Marlena and insist she must die. Instead of committing murder, Princess Gina will make sure Marlena’s tied up and waiting for “Steve Johnson” aka Stefano DiMera (Stephen Nichols).

In Europe, “Steve” will make some blunders during his mission with John Black (Drake Hogestyn). After they bump into Tony DiMera (Thaao Penghlis) and Anna DiMera (Leann Hunley), Anna will drive “Steve” up the wall. Her Stefano insults will lead to “Steve’s” outburst, so the others will question why he’s lashing out.

Days spoilers say John will also find Stefano’s ring in “Steve’s” bag. He’ll grill “Steve” about it, but “Steve” will manage to come up with a reasonable excuse. Afterward, Dr. Rolf will show up to “murder” “Steve” in front of John. Once John is knocked out and taken back to some dungeon in Salem, he’ll be shackled and held captive. “Hope” will let John down while “Steve” does the same for Marlena.

The plan will be complete after John learns Marlena is “dead” and Marlena hears that John is “deceased,” too. Over with Brady Black (Eric Martsolf), he’ll wonder what’s up when Xander Kiriakis (Paul Telfer) makes a frantic request. It sounds like Xander will want Brady to get tested ASAP and find out if he’s a bone marrow match for Mackenzie “Mickey” Horton.

Next, Eric Brady (Greg Vaughan) will lean on Sarah Horton (Linsey Godfrey). He’ll believe Nicole Walker (Arianne Zucker) has reunited with Brady, so he’ll seek comfort from Sarah and plant a kiss. During the week of February 3-7, Sarah will make a bold declaration. She’ll profess her love to Xander, so it sounds like that kiss with Eric won’t mean anything to her. It’s not a good idea to go down that road.

Days of Our Lives spoilers say Nicole will eventually confess to Eric. She’ll admit this is all part of a plan to trick Kristen DiMera (Stacy Haiduk). Nicole will assure Eric that he’s still the only man she wants, so we’ll see how he responds.

Elsewhere, DOOL spoilers say Marlena will grieve for John – all while John’s alive and well. John won’t have the truth either, so this will be a difficult obstacle to get past. However, there’s no stopping the power of “Jarlena’s” love! Sooner or later, they can conquer this hurdle like all the ones that came before it.

In the meantime, Days of Our Lives spoilers say Ben Weston (Robert Scott Wilson) will receive shocking news. He’ll learn the whole story behind Will Horton’s (Chandler Massey) innocence and how Victor Kiriakis (John Aniston) was willing to let him rot behind bars. Will and Ciara Brady (Victoria Konefal) will bring Ben up to speed – and perhaps get some advice on how to handle Victor.

It sounds like the next two weeks will bring some hot drama. We’ll give you updates as other Days details emerge. Stay tuned to DOOL and don’t forget to check CDL often for the latest Days of Our Lives spoilers, updates and news.