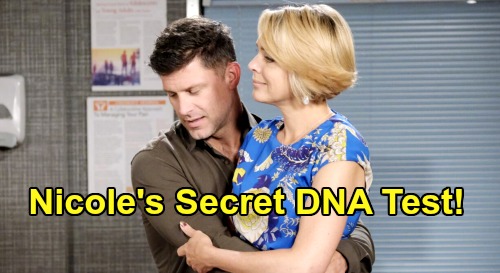 Days of Our Lives (DOOL) spoilers tease that Nicole Walker (Arianne Zucker) will soon find herself in sleuth mode. As DOOL viewers know, she’s been all over Xander Kiriakis (Paul Telfer) lately, ever since she heard him talking to Dr. Raynor (Victoria Platt) about a big secret.

Nicole doesn’t know what’s going on between Xander and Dr. Raynor, but since she knows what Xander is capable of, the whole thing’s got her worried and she senses that it all somehow relates to baby Mackenzie “Mickey” Horton.

She’d be right about that, since baby Mickey isn’t really Mickey at all. As DOOL viewers know, Xander, Victor Kiriakis (John Aniston), and Dr. Raynor switched babies in the nursery after the real Mickey died shortly after her birth.

They switched Mickey out with Kristen DiMera (Stacy Haiduk) and Brady Black’s (Eric Martolf) little girl Rachel Black, and Kristen and Brady were led to believe that it was Rachel who died.

Well, it seems that as the week of March 9-13 unfolds, Nicole will start to put the pieces together about the baby switch. According to Days of Our Lives spoilers, she’ll get some intel from Brady about how Rachel had a birthmark on her neck.

When Nicole later sees a birthmark on the baby that everyone’s now calling Mickey, things will start to click in her mind. She’ll realize that Mickey could actually be Kristen and Brady’s little girl.

But it appears that Nicole will want to be very careful in how she handles this situation. On the one hand, she doesn’t want to keep anything from Eric Brady (Greg Vaughan) regarding Mickey, but she won’t want to just blurt out her suspicion, either.

It looks like she’ll go on a secret mission to get some proof that Mickey is really Rachel, as DOOL spoilers say that Nicole will take steps to prove her suspicions.

And that can mean only one thing – Nicole will likely arrange for a secret DNA test. In recent years, DOOL has been all about characters arranging for clandestine DNA tests, so why shouldn’t Nicole be any different? She might try to get DNA samples from both Brady and Kristen, which could be tricky.

According to DOOL spoilers, Nicole will pick a fight with Kristen right around the time she’s trying to prove her suspicions, so the fight could be a ruse to try to pluck a strand of Kristen’s hair for a DNA sample.

We’ll see if that happens and if she succeeds, but it certainly looks like Nicole is destined to get DNA proof of a parental match to Mickey before she drops the bomb on Kristen, Brady, Eric, and Sarah Horton (Linsey Godfrey) about this situation.

Who knows – Nicole might even go after Dr. Raynor for more confirmation of the baby switch, if Dr. Raynor ends up sticking around Salem. Something tells us that Nicole won’t just want proof that the babies were switched, but that she’ll want some evidence to point to Xander and Victor as the culprits here. Nicole would like nothing more than to take Xander down after all the horrible things he’s done to her in the past.

At any rate, Nicole’s sleuthing seems sure to have some big consequences for a lot of people, and it looks like this baby swap secret will be coming out very soon. Do you expect to see Nicole get a secret DNA test performed for baby Mickey? Stay tuned to Days of Our Lives and be sure to visit CDL frequency for the latest DOOL spoilers, updates, and news.