Days of Our Lives Spoilers: Orpheus & Rafe Face Off Over Baby David – Will Orpheus Have Rafe Killed? 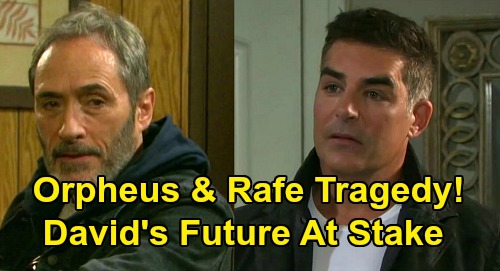 Days of Our Lives (DOOL) spoilers tease that Rafe Hernandez (Galen Gering) will soon face one of his biggest battles. As DOOL viewers know, Rafe has been caring for Jordan Ridgeway’s (Chrishell Stause) son David Ridgeway (Caleb and Kyler Ends) ever since Jordan’s death. Rafe considers himself to be David’s father, and so he was naturally upset when Evan Frears aka Christian Maddox (Brock Kelly) was revealed to be David’s biological father.

But then things got worse for Rafe. Not only is Evan a dangerous murderer, but he’s also the son of Orpheus (George DelHoyo). That puts Rafe in a tenuous position, since now he’s got to fight not only Evan for custody of David, but he’s got to fight Orpheus, too. Although it’s doubtful that a court would hand David over to Orpheus, it might hand David over to Evan under the right circumstances.

After all, Evan isn’t a convicted murderer at this point – Evan’s simply been accused of the crime, and it’s possible that he could totally walk on the charges against him. After all, the evidence against Evan could probably be easily refuted by the right lawyer, and besides, the confession that Ciara Brady (Victoria Konefal) got from Evan was thrown out.

Days of Our Lives spoilers say that Orpheus will step in to help Evan by hiring him a dynamic and sharp lawyer named Zoey (Alyshia Ochse), who will appear on the scene during the week of April 13-17. Zoey will apparently start off her tenure as Evan’s lawyer with a bang, as she’ll have something shocking to tell Rafe.

Could Zoey reveal that even more evidence against Evan is being thrown out? Or perhaps Zoey will finagle some way to make the whole murder case against Evan be dismissed. Evan will still have kidnapping charges to contend with, but Zoey might argue that this wasn’t that serious of a crime, considering that Evan is David’s biological father.

DOOL spoilers also indicate shortly after Zoey comes on the scene with her legal maneuvering, Rafe and Orpheus will have a big face off over David. And if we know Orpheus, then he’ll probably throw around some threats and insist that there’s no way that Rafe will be raising his grandson. We don’t expect Rafe to back off, either, so the men will likely be at a stand-still.

Well, this makes us wonder about Rafe’s future. As you might remember, DOOL buzz is that Galen Gering, who portrays Rafe, will be leaving the show later this year. It’s a terrible thought, but it’s always possible that Orpheus will take some action against Rafe, like having him killed in order to make sure that Evan gets custody of David.

We’ll see what happens here, but it’s hard to imagine Orpheus just letting Rafe end up with David, no matter what a court might say. Do you think that Orpheus will end up having Rafe killed to make sure Evan gets custody of David? Stick with the NBC soap so you don’t miss any of the action! And remember to keep CDL bookmarked for the latest Days of Our Lives spoilers and news.