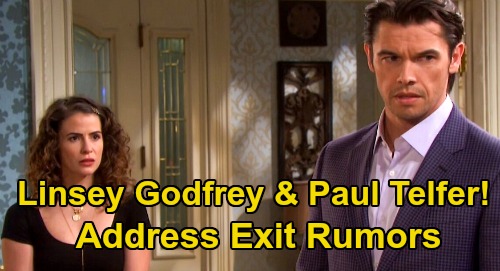 Days of Our Lives (DOOL) spoilers tease that after all the exit announcements lately, viewers are wondering who’s going to be left in Salem this fall. With so many changes in the works, it’s definitely got some fans concerned about their remaining favorites. Is anyone else on DOOL at risk of quitting or being cut from the show?

There could be even more announcements as we get closer to autumn, but there’s finally some good news to report. According to Paul Telfer (Xander Kiriakis) and Linsey Godfrey (Sarah Horton), their characters are set to stick around.

One Days fan recently asked Telfer and Godfrey about their status on Twitter. She wanted to make sure they weren’t going anywhere, so here’s what Godfrey and Telfer had to say.

“They’re going to have to pry me out of there haha!” Godfrey replied. “Oh yeah, I’m not going anywhere (as far as I know),” Telfer insisted.

Of course, nothing’s ever a sure thing on soaps – and Telfer did point out that this is as just as far as he knows! Godfrey added that “there is always that element of surprise,” so anything can happen down the road.

Still, we’d say Days would like to stop the bleeding when it comes to this flood of cast departures. They’re already losing some hot performers and couples, so DOOL’s surely interested in keeping Xander and Sarah around if at all possible.

From the sound of things, Sarah and Xander will indeed remain part of the action once production resumes this September. That’s exciting to hear now that Sarah’s agreed to let Xander take him out to dinner.

Days of Our Lives spoilers say Xander still has some work to do if he wants to restore trust, but he’s willing to do whatever it takes. Likewise, Sarah’s finally willing to reopen her heart.

Now that Telfer and Godfrey have confirmed their status with the show, we know there’ll be plenty of time for “Xarah” to get back on track.

Could Sarah and Xander even try tying the knot again eventually – and do it for real this time? It’ll be interesting to see if Xander and Sarah can conquer any other obstacles that land in their path and actually marry one day.

We’ll pass along updates as other Days details come in. Days of Our Lives spoilers say some other casting shockers could be looming, but it’s good to know Xander and Sarah are safe for now!

CDL will have plenty of other Days of Our Lives spoilers, updates and news to read up on, so don’t forget to stop by regularly for great posts.