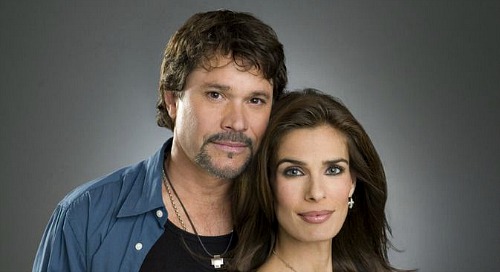 Days of Our Lives (DOOL) spoilers has some news to pass on about a former star of the NBC soap. Peter Reckell, who portrayed Bo Brady on Days of Our Lives, recently shared some information with his social media followers about a new movie that he’s urging others to see. Peter’s is active on Twitter, where he often promotes protecting and preserving the environment.

Well, recently, Peter shared an update about a movie that touched his heart and that he wanted to recommend to his fans and followers. The movie is called “Kiss the Ground” and it’s currently steaming on Netflix.

Of the movie, Peter tweeted: “I just watched this amazing movie, “Kiss the Ground.” I know some of you shut down when I post something about climate change, but I challenge you to watch this movie and see how simple it would be to preserve our planet.

The film’s description reads as follows: “Kiss the Ground reveals that by regenerating the world’s soils, we can completely and rapidly stabilize Earth’s climate, restore lost ecosystems and create abundant food supplies.” The movie is narrated by Woody Harrelson and was an official section of the 2020 Tribeca Film Festival.

Peter has received a lot of comments in response to his tweet about the movie, including one from Greg Meng, who’s a co-executive producer at Days of Our Lives and a senior vice president of Corday Productions. Greg wrote: “Thanks for sharing this…we will check it out.”

Others said that they were either planning on watching or had just watched the film on Peter’s recommendation.

One person replied to Peter’s tweet by saying: “Thank you, Peter! I had not heard of it before your post…so I watched it this afternoon! It’s eye-opening! We have been composting all summer & I grew my 1st very small garden this year It takes small steps from everyone!”

And someone else replied with: “I’m so very glad you are who you are! You’re living the cause! We all should do better. I try!”

“Kiss the Ground” has an official website where its creators are hoping for 100 million views of its trailer. Currently, the running total is 6.7 million views, and you can help add to that total by visiting kissthegroundmovie.com.

At any rate, we suspect that a lot of people will watch “Kiss the Ground” based on Peter’s glowing recommendation. Do you plan on watching? Stay tuned to the NBC soap and don’t forget to check CDL frequently for the latest Days of Our Lives spoilers, daily episode recaps, and news.