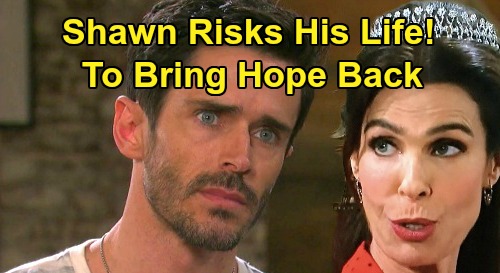 Days of Our Lives (DOOL) spoilers tease that Shawn Brady (Brandon Beemer) will land in danger when he decides to confront his mother, who isn’t really his mother at all. Hope Brady (Kristian Alfonso) certainly isn’t herself at the moment. She’s been transformed into Princess Gina Von Amberg and has been living that way for well over a year.

Shawn really needs to stick around and rejoin the Salem PD because he’s the smartest man in Salem! It was nice to see someone actually have a brain at the police station for once.

Rafe should’ve called Shawn a long time ago, but better late than never. Now that Shawn and Rafe know the truth, they realize they have to proceed with caution. Shawn pointed out that Princess Gina tried to kill him once upon a time.

DOOL fans will recall that Gina loathes Shawn, so any interaction between them will put his life at risk.

During the week of February 10-14, Shawn will find himself in a situation where he simply has no choice. He’ll feel he must corner Princess Gina and try to stop her wild behavior.

Days of Our Lives spoilers say Princess Gina will be out of control, so Shawn will believe it’s his duty to step up before anyone else gets hurt. Of course, that brings the potential for Shawn to get hurt himself.

Days of Our Lives spoilers say he’ll know he’s walking into the fire here, but what else can he do? Shawn can’t just let Princess Gina run amok and potentially murder half the town.

Something must be done to stop her, and Shawn will think he can be the one to do it.

Although “Hope” has been dormant for a while now, Days spoilers say Shawn will hope she’s still in there somewhere. He’ll count on the power of love to be stronger than Princess Gina’s hold on his mom.

After Shawn confronts Princess Gina, he’ll appeal to “Hope” and try to get through to her somehow. Shawn will want to break this memory barrier and bring the real Hope back.

It’s easy to imagine Princess Gina pulling a gun on Shawn at some point. Shawn may have to plead for his life and make his mother see that she doesn’t want to do this. Princess Gina has no emotional attachment to Shawn and would rather see him dead than alive.

Hope, however, would be devastated if she knew she murdered her son – even while under mind control.

It’s doubtful Shawn’s passionate plea will change Princess Gina back into Hope, but he might break through enough for her to hesitate. That could give Shawn a chance to regain the upper hand.

This is sure to be a shocking showdown, so don’t miss what’s in store. We’ll give you updates as other Days news comes in. Stick with DOOL and don’t forget to check CDL often for the latest Days of Our Lives spoilers, updates and news.