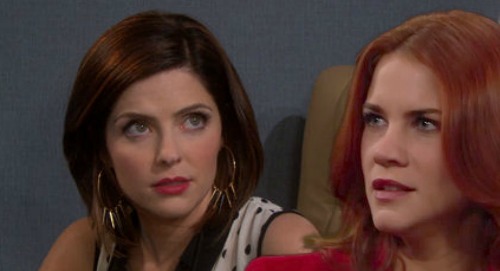 Days of Our Lives (DOOL) spoilers reveal that one popular soap star is up for grabs. The Bold and the Beautiful is ditching a top-notch actress since Courtney Hope’s (Sally Spectra) exit from the show has been confirmed.

On the bright side, there are three other soaps that’d be lucky to have her! Hope could easily score primetime work as well, but let’s focus on what she could bring to the table at Days.

DOOL’s proven that they know how to take advantage of discarded B&B talent. Linsey Godfrey was written off The Bold and the Beautiful before landing at Days of Our Lives as Sarah Horton.

Could Courtney Hope be next? If so, Hope would certainly be a welcome addition – at least for those of us who have seen her in action.

Hope’s the kind of actress who can take a bad story and turn it into something worth watching. That’s exactly what Hope did with her widely panned exit storyline at B&B.

Sally has always been a feisty character who isn’t afraid to scheme here and there, but she went too far by faking a terminal illness to win back her former flame, Wyatt Spencer (Darin Brooks).

Although the plot was deemed ridiculous by most viewers, Hope sold the heck out of it. She acted her little heart out and proved she can elevate any material. Just imagine what Hope could do with a good storyline at Days of Our Lives?

Since the NBC soap is facing so many major exits – including big ones like Camila Banus (Gabi Hernandez DiMera) and Victoria Konefal (Ciara Weston) – it’d be a good idea to fill the void somehow. Hope could easily head over to DOOL as a brand-new character or perhaps a recast of someone off canvas.

Some fans have suggested Hope as a potential Stephanie Johnson (Shelley Hennig) recast since it’d be nice to have Steve Johnson (Stephen Nichols) and Kayla Brady’s (Mary Beth Evans) daughter back in Salem.

Hennig left Days of Our Lives in 2011 and made a handful of appearances in 2017, but she’s mostly focused on film and primetime roles now. The show could use a new Stephanie played by Hope.

However, Hope would also make a great recast for Theresa Donovan (last played by Jen Lilley). Lilley doesn’t seem interested in any lengthy stint at Days, so it might be time to bite the bullet and replace her.

This would be the ideal opportunity to revert Theresa to her scheming ways since Hope knows how to play a schemer. Plus, Theresa would be more useful if Days turned her back into a vixen. There’s always a chance Gabi will return, but DOOL will need someone to slide in that vixen spot if she doesn’t.

Would you like to see Courtney Hope join the cast of Days? Do you think Hope would make a good Theresa Donovan recast or would you prefer her in a different role? We’ll pass along updates as other DOOL news rolls in.