Days of Our Lives Spoilers: Should DOOL Recast EJ DiMera or Kill Character Off for Good? – Sami’s Love Life and Future Revealed 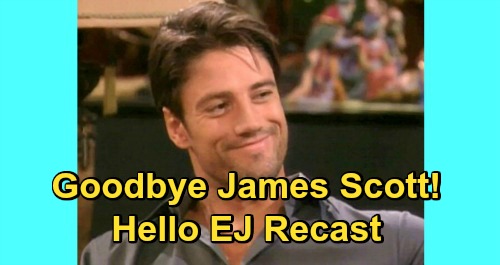 Days of Our Lives (DOOL) spoilers tease that the future of one character is uncertain now that James Scott has confirmed he’s never returning as EJ DiMera. In reply to a fan on Instagram, Scott made it crystal clear that he has no interest in Hollywood, let alone Days of Our Lives.

That’s good to know since viewers can stop hoping that Scott will make a comeback and focus on other options instead.

Of course, those options are recasting the role of EJ or just killing the character off for good. The worst thing Days could do is just leave the character in limbo, especially since Sami Brady DiMera (Alison Sweeney) is heading back to Salem later this year.

Sami will be sticking around through most of 2021 – and there’s always a chance Sweeney will extend her contract even further.

It’s obvious that Days is happy to welcome Sweeney back whenever possible, so it’d be a good idea to either give Sami a new version of EJ or just get rid of him entirely. Let’s consider the pros and cons here.

On one hand, James Scott simply was EJ DiMera in many fans’ eyes. It might be challenging to find the perfect recast that viewers would embrace.

Some DOOL watchers don’t want EJ back unless Scott reprises the role – and he’s adamant that it’ll never happen. With that in mind, Days could simply let EJ fade away since he’s having such a hard time recovering from his injuries anyway.

At one point, Lucas Horton (Bryan Dattilo) ranted about Sami hovering over what was left of EJ and multiple setbacks have been mentioned. EJ clearly isn’t doing well, so it wouldn’t be unreasonable for him to simply pass away.

That’d free Sami up to grieve again and eventually move on with someone new – or perhaps a different old flame.

On the other hand, EJ is a fantastic character when he’s healthy and thriving. Plus, it seems kind of cruel to make Sami go through a whole mourning period again.

It wouldn’t hurt for Days of Our Lives to at least try a recast and see what happens. Maybe EJ should finally recover and hit Salem once again.

If viewers didn’t care much for the new EJ or if DOOL wanted to go in another direction, they could always have him split from Sami and leave town. However, we’d say the most likely option for Sami’s upcoming stint would be cheating.

While EJ’s still recovering in Italy, lonely Sami could easily land back in bed with someone like Rafe Hernandez (Galen Gering), who’s also set to return soon.

As for what happens between EJ and Sami down the road, that’ll probably be a decision that’s saved for a later date. We’ll pass along updates as other DOOL news becomes available.