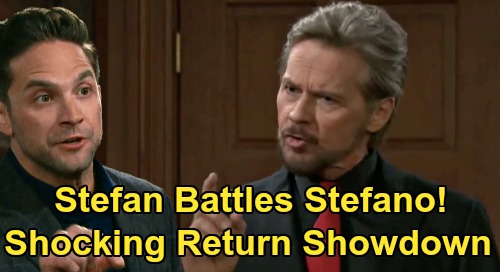 Days of Our Lives (DOOL) spoilers tease that Gabi Hernandez (Camila Banus) has been having a terrible time lately. Her year-long scheme to get revenge on Lani Price (Sal Stowers) by controlling Julie Williams’ (Susan Seaforth Hayes) heart with an app completely blew up in her face as she was about to marry Eli Grant (Lamon Archey). Then she got fired from DiMera Enterprises, so things are really on the downswing for her.

Well, things may be looking a bit better for her this spring, since DOOL buzz is that Brandon Barash, who portrayed Stefan DiMera in the past, will be returning to the show.

Of course, whether he’ll be portraying a back-from-the-dead version of Stefan or another doppelgänger type character remains to be seen, but given the popularity of the Stefan/Gabi pairing, it’s probably most likely that he’ll be back as Stefan.

In fact, there are loads of “Stabi” fans out there who are waiting anxiously for Stefan and Gabi to come face-to-face again. It will be a much-anticipated reunion, that’s for sure.

But just because the two will be back in each other’s orbits doesn’t mean that things will be smooth sailing from here. Stefan will have a new problem to contend with, that that’s the return of his father, Stefano DiMera aka Steve Johnson (Stephen Nichols) to Salem.

Stefan and Stefano have never met, but it looks like that could all change in a few weeks. It would be fascinating to see how the two men interact, and whether they’ll immediately bond or whether they’ll be some friction between them. Considering Stefano’s tendency to antagonize his sons and his treatment of Gabi, it’s likely that there will be some friction. And considering Stefan’s choice of Gabi as his wife, there are bound to be some big disagreements.

After all, Stefano and Gabi haven’t exactly gotten off on the right foot, and neither have Kristen DiMera (Stacy Haiduk) and Gabi. In fact Days of Our Lives spoilers tell us that Stefano will soon send Chad DiMera (Billy Flynn) to murder Gabi when she’s vulnerable in hospital.

We will be in for a fierce fight between Stefan and Stefano over Gabi, and Stefan wouldn’t be willing to back down to Stefano. Stefan really loved Gabi back when they were together, and unless his memory has been wiped or something of that nature, he’s surely going to demand that Stefano and the rest of the family accept Gabi as a part of the family.

We’ll see what ends up happening, but Stefan’s love of Gabi plus Stefano’s dislike for her seems like a real recipe for disaster in this father/son relationship. Do you think that Stefan and Stefano will clash over Gabi? Stick with DOOL and don’t forget to read CDL regularly for the latest Days of Our Lives spoilers and news.