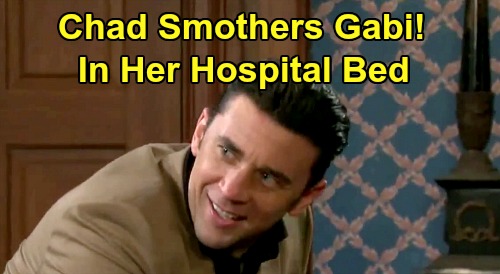 Days of Our Lives (DOOL) spoilers tease that Chad DiMera (Billy Flynn) will basically turn into Stefano DiMera aka Steve Johnson’s (Stephen Nichols) death bot. He’ll find himself under Stefano’s spell thanks to whatever drugs he’s been given, so he’ll become a killer DiMera soldier – ready to take out anyone Stefano pleases!

DOOL fans can expect Kate Roberts (Lauren Koslow) to be on Stefano’s murder list, but she won’t be the only one. In fact, it looks like Gabi Hernandez (Camila Banus) may be at the top! Days of Our Lives spoilers say Gabi will land in grave danger soon enough.

The trouble will start after Gabi Hernandez (Camila Banus) winds up in the hospital. No matter what circumstances put her there, Gabi’s ordeal will ultimately get even worse. For starters, she’ll face Julie Williams’ (Susan Seaforth Hayes) fierce wrath.

That won’t be helpful to Gabi as she tries to recover, but Julie won’t care about Gabi and her needs. What Gabi really needs is to be rotting behind bars – at least as far as Julie is concerned! Days of Our Lives spoilers say Julie will certainly let Gabi know that before stomping off.

Once Gabi’s alone, she’ll probably try to get some rest as Chad appears. Days of Our Lives spoilers say Chad will be ready to carry out his father’s lethal wishes. He’ll be under Stefano’s mind control, so he won’t know what he’s doing.

It won’t be long until a menacing Chad approaches Gabi’s bed and most likely grabs a pillow. Days of Our Lives spoilers say Chad will ultimately try to smother Gabi! He’ll want to drain the life right out of her thanks to this spell of Stefano’s.

Days of Our Lives spoilers, updates and news say Gabi’s sure to panic as she awakens and sees Chad moving in for the kill. Then again, perhaps Gabi will simply feel a pillow over her face and struggle to scream.

There’s even a chance Chad will be stopped before he can truly attempt the smothering, but he’ll definitely go in with the intention of murdering Gabi.

Regardless, Days viewers can expect Gabi to survive this encounter during the week of March 9-13. She’ll live to tell the tale, but she’d better sleep with one eye open! We’ll keep you posted as other DOOL news emerges. Don’t forget to pop over to CDL often for the hottest Days of Our Lives spoilers and updates.