Days of Our Lives Spoilers: Week of March 2 Preview – Ben Gets Lethal Injections – Ciara Races To Stop The Execution

BY hellodrdavis on February 28, 2020 | Comments: one comment
Related : Days of Our Lives, Soap Opera, Spoiler, Television 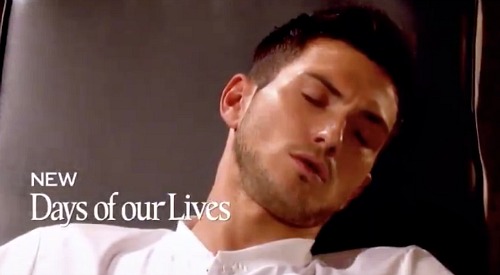 Days of Our Lives (DOOL) spoilers tease that we’re in for some real life-or-death drama as the week of March 2nd kicks off on the NBC soap. As DOOL viewers know, Ben Weston (Robert Scott Wilson) has just had his last meal with his dad Clyde Weston (James Read) and his final conversation with his friend Marlena Evans (Deidre Hall). Now it’s time for his execution to begin.

Well, the new DOOL preview promo for the week of March 2 to March 6 addresses Ben’s terrible situation as he heads to the execution area of the prison. The promo shows him hooked up to an IV and strapped to the execution contraption, with his arms outstretched so that the lethal injections can be made. A medical professional tends to the IV drip as he tells Ben that his arms and legs will soon start to feel heavy.

As it turns out, Ben will be set to receive three injections, and the medical professional will tell Ben that “this drug will make your heart stop almost instantly.” Marlena is shown looking through the glass from the observation room, clearly distressed and hoping that Ben will receive a last-minute reprieve.

Ciara Brady (Victoria Konefal) will be on hand as well, but she’ll be on a frantic mission. According to DOOL spoilers, she’ll come bursting in the observation room with Will Horton (Chandler Massey), demanding that the execution be stopped immediately. She’ll be armed with information about who really killed Jordan Ridgeway (Chrishell Stause).

She’ll quickly explain to the officials on hand that Evan Frears aka Christian Maddox (Brock Kelly) was the real murderer, and that she’s got DNA evidence to prove that Evan is the guilty party here, not Ben. Unfortunately, it doesn’t look like the officials will find any of this to be persuasive, and they’ll insist that the execution continue.

Ciara will stop briefly to look at Ben through the observation glass, then she’ll leave with Will to try to find Evan to force a confession out of him. At this point, Ben will start to get the first of his three lethal injections, and the DOOL promo shows him flashing back through his memories with Ciara. It looks like he’ll be pretty affected by the drugs, and he’ll even imagine Ciara reaching out to him.

Ben will fuzzily call out, “Ciara, where are you?” as the drugs take effect. DOOL spoilers say that while the execution progresses, Will and Ciara will find Evan holding Sonny Kiriakis (Freddie Smith) at gunpoint. Ciara, determined to save Ben, will end up disarming Evan and dragging Evan at gunpoint over to the prison.

Just before Ben gets his third injection, Ciara will burst in the observation room again, this time with Evan in tow. She’ll apparently show Evan just what his horrible actions have caused, and he’ll end up confessing to Jordan’s murder.

Thanks to her heroic efforts, the execution will be called off, but the big question at that point will be whether Ben makes it out of this alive. According to DOOL spoilers, Ben will flatline, and heroic measures will have to be taken to save his life.

We might see some more Ben hallucinations here, as he nearly goes to the other side. One thing’s for sure – this will be a dramatic last-minute rescue, so stay tuned! We’ll give you updates as more DOOL news comes in. Be sure to stop by CDL often for the latest Days of Our Lives spoilers and news.