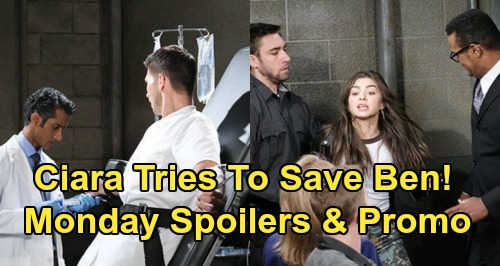 In Monday’s DOOL episode, Justin will explain this tricky situation to John Black (Drake Hogestyn). He’ll beg John to help him get Kayla back, so John will naturally get on board.

Days of Our Lives spoilers say John and Justin will team up on a scheme to take Stefano down. They’ll hope they can secure Kayla’s freedom and keep Marlena safe in the process, but this plot’s sure to head downhill fast.

In the meantime, Dr. Wilhelm Rolf (William Utay) will make a shocking suggestion. DOOL fans know Kayla tried to make her escape, but Stefano walked in before she had the chance. He needs Kayla to stick around so he’ll have leverage to get Marlena, so he’ll try to make sure no other getaway attempts happen.

Dr. Rolf will think Stefano has other options to consider. He’ll urge Stefano to be open-minded about how he gets what he wants. Days spoilers, updates and news say Dr. Rolf will suggest another way for Stefano to be with Marlena. There’s no word on what that way is, but the crazy doc’s suggestion will leave Kayla horrified.

It’s possible Dr. Rolf will want to put Stefano’s “essence” in John’s body or something along those lines. It doesn’t seem like it’d help to put Marlena’s consciousness in Kayla. She still wouldn’t want to be with Stefano! Besides, Stefano wants the whole package when it comes to Marlena, including her looks.

Whatever the case, this process would probably take too long for Stefano’s taste. It took quite a while for Dr. Rolf to complete Steve’s transformation, so Stefano may end up nixing Dr. Rolf’s idea.

Across town, Ciara Brady (Victoria Konefal) won’t get anywhere over the phone. She called Statesville in hopes of stopping Ben Weston’s (Robert Scott Wilson) execution, but nobody will listen to her complaints.

As a result, Days of Our Lives spoilers say Ciara will head to the prison and try to stop the execution in person. She’ll find Will Horton (Chandler Massey) there and bring him up to speed on Evan Frears aka Christian Maddox (Brock Kelly). Once Will explains that he knows where to find Evan, he’ll race back to the Kiriakis mansion with Evan.

Over with Sonny Kiriakis (Freddie Smith), he’ll be floored by Evan’s sudden move. Evan just pulled a gun on him, so Sonny’s wondering what the heck’s going on. It won’t be long until Evan admits he’s David Ridgeway’s (Caleb and Kyler Ends) father.

An unhinged Evan will try to convince Sonny that they can still have a future together, but that’s clearly not what Sonny wants. He loves Will and Evan’s gone crazy!

Days spoilers say Will and Ciara’s arrival will ultimately bring another curveball for Evan, so stay tuned. Be sure to check back for other DOOL news and updates. CDL will have lots of hot Days of Our Lives spoilers to pass along.