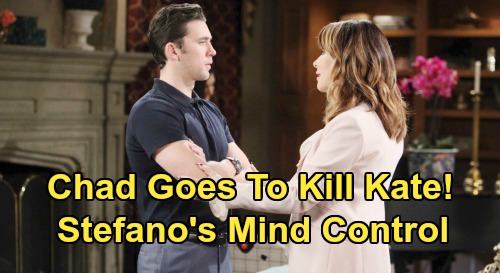 Days of Our Lives (DOOL) spoilers tease that Stefano DiMera aka Steve Johnson (Stephen Nichols) will put a lethal plot in motion. He’ll busy with other important matters, so he’ll count on Chad DiMera (Billy Flynn) to carry out this particular plan. DOOL fans can expect Chad to wind up under Stefano’s spell, so it sounds like some sort of hypnosis or brainwashing scenario.

Whatever the case, Days spoilers say Chad certainly won’t be himself. He’ll get ready to carry out Stefano’s fatal orders, which isn’t something Chad would normally be doing. Unfortunately, the victim Stefano has in mind is someone Chad truly cares about. It turns out Kate Roberts (Lauren Koslow) will become a murder target!

Although Chad’s faced his fair share of issues with Kate, she’s been like a mother to him over the years. Kate’s one of the last people Chad would want to kill. Stefano, on the other hand, will have no use for Kate anymore. She betrayed him, so that may be why Stefano’s plotting against her. He may feel like Kate deserves to pay with her life.

In other words, Days of Our Lives spoilers, updates and news say Chad may be carrying out a revenge mission. He apparently won’t know what he’s up to thanks to Stefano’s spell. DOOL viewers can expect some wild moments as this storyline heats up.

During the week of March 9-13, Stefano will deliver very specific instructions to Chad. He’ll order him to kill Kate, so Chad will agree to do what his father tells him. You can bet Chad will be horrified when he ultimately snaps out of this!

Will Chad come to his senses before he attempts murder? Could Kate or someone else actually get hurt?

Regardless, Days of Our Lives spoilers say Stefano’s going to extremes. Steve’s sure to be just as horrified as Chad by his own mind control. Stefano has completely taken over Steve’s body and mind.

Stefano’s doing all sorts of terrible things Steve would never approve of. Steve would be especially heartbroken if he knew what Kayla Brady (Mary Beth Evans) was going through.

Thankfully, Steve will get his mind and body back down the road. It’ll take some time, but Days spoilers say Stefano will eventually be defeated. As other DOOL news and updates emerge, pop back in CDL for more info. CDL will have plenty of hot Days of Our Lives spoilers to check out.