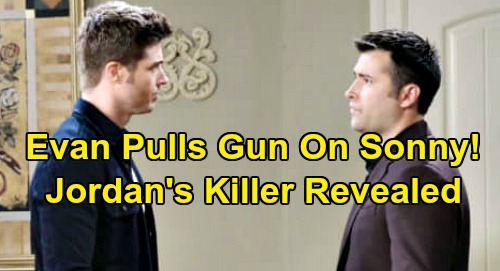 Days of Our Lives (DOOL) spoilers tease that Evan Frears (Brock Kelly) is about to lose it. The walls are closing in – and things are only going to get worse during the week of March 2-6. DOOL fans know Rafe Hernandez (Galen Gering) had to run a background check on Evan as part of David Ridgeway’s (Caleb and Kyler Ends) adoption process. When an issue surfaced, Evan hid the first letter and has now crumpled a second one.

Of course, Evan can’t keep his dark secrets under wraps forever. In fact, Rafe will corner Evan this Friday and demand some answers about his deception. He’ll find out something he didn’t know before and push Evan to explain why he lied.

Evan may pile on the fibs in an attempt to save himself. Regardless, he’ll start to come unhinged by the time he meets up with Sonny Kiriakis (Freddie Smith).

It looks like Sonny will bring Evan up to speed on Will Horton’s (Chandler Massey) release, but Evan won’t care about that. He’s fallen hard for Sonny and wants to be with him.

With that in mind, Evan will make some shocking moves in hopes of locking down their future. Days of Our Lives spoilers say Evan will pull a gun on Sonny and reveal that he’s actually David’s father.

Sonny should be floored when he realizes Evan’s been lying this whole time. There was reason Evan sought the nanny job and moved all the way to Salem. He’s David’s bio dad, which means he’s also Jordan Ridgeway’s (Chrishell Stause) killer if Ciara Brady’s (Victoria Konefal) theory is proven correct.

Naturally, Sonny will be pretty bewildered both by Evan’s secrets and his disturbed state. He’ll quickly realize Evan’s out of control. Days of Our Lives spoilers say Evan will be desperate to preserve his chance with Sonny.

He’ll try to convince Sonny that they’re meant to be, but it’ll be hard for Sonny to buy that when Evan’s gone crazy and has a gun in his face.

Days spoilers, news and updates say some twists are brewing when it comes to Sonny’s rescue. He’ll really be in a jam, but there’s almost always a way out! Sonny will get the help he needs soon, so stay tuned for some hot Days drama.

Are you excited for the Evan bombshells ahead? As other DOOL updates and news emerge, don’t forget to drop by CDL for more Days of Our Lives spoilers.